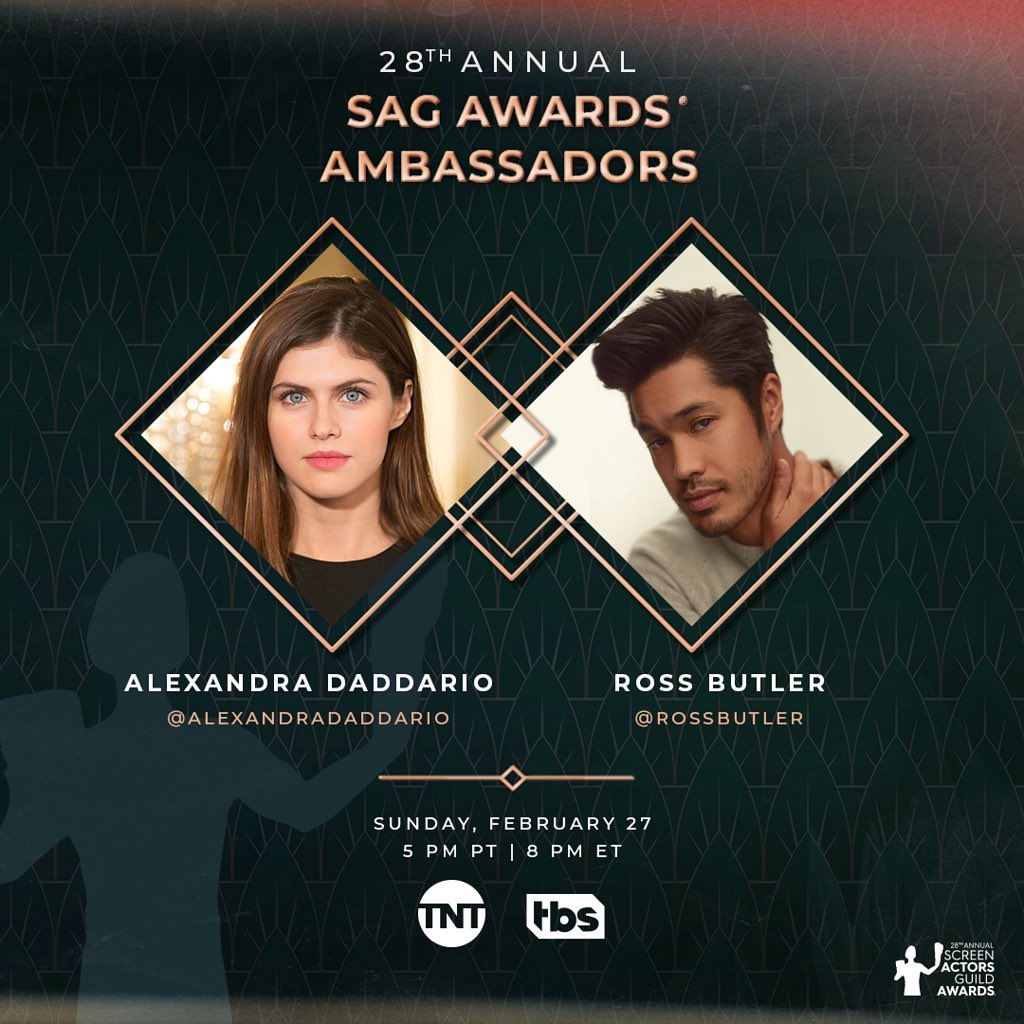 Alexandra Daddario and Ross Butler have been named Ambassadors for the 28th Annual Screen Actors Guild Awards®. The SAG Awards® will be nationally simulcast LIVE on TNT and TBS on Sunday, Feb. 27 at 8 p.m. ET / 5 p.m. PT, and will be available the following day on HBO Max.

SAG Awards Ambassadors are actors who exemplify the utmost values of the profession and are positive role models for the next generation of performers. These individuals actively use their platform to advocate for humanitarian and public service endeavors. In this special role, Daddario and Butler will present on the show, and provide viewers with exclusive behind-the-scenes access to the ceremony. The Ambassadors will also participate in various SAG Awards pre-show events, including an inaugural private dinner hosted by presenting sponsor Campari at SAG Awards executive chef Curtis Stone’s Gwen Butcher Shop & Restaurant.

Alexandra Daddario garnered critical, fan and viral attention with her breakout role in the first season of Emmy-nominated HBO series, True Detective, alongside Woody Harrelson and Matthew McConaughey. She starred in the Warner Bros/New Line epic summer blockbuster, San Andreas, opposite Dwayne Johnson, and recently starred alongside Connie Britton and Sydney Sweeney in the HBO limited series The White Lotus. Daddario is an ambassador for The Elizabeth Taylor AIDS Foundation and Care.org, where she is also a member of CARE’s Global Advisory Council with a mission of working around the globe to save lives, defeat poverty, and achieve social justice. A New York City native, she currently resides in Los Angeles, CA. Daddario can be found on social media as @alexandradaddario on Instagram and @AADaddario on Twitter.

Ross Butler is well-known for his role as ‘Trevor’ in the wildly successful Netflix franchise, To All The Boys, opposite Noah Centineo and Lana Condor. He starred in the Netflix original television series, 13 Reasons Why, one of the streaming service’s most popular offerings overall. Other notable credits include: the CW hit teen drama, Riverdale, the DC hit superhero film Shazam!, and the Disney Channel family comedy, K.C. Undercover in which he starred opposite Zendaya. In addition to his thriving acting career, Butler is known for his outspoken views on the portrayal of Asian-Americans in stereotypical roles and the outstanding need to have nuance in representation within the industry. He continues to break the norms of culturally specific narratives with the hopes of diversifying and paving the way for future generations. The Singapore-born, Virginia-raised actor currently resides in Los Angeles, CA. Butler can be found on social media as @rossbutler on Instagram and Twitter.