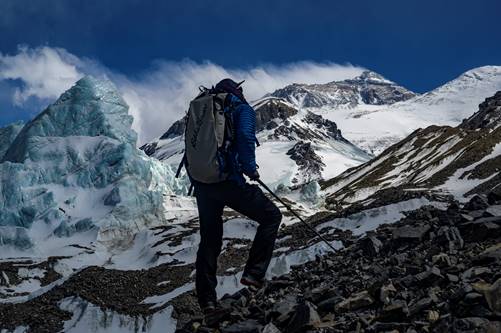 TO LIVE OR DIE ON EVEREST will debut Friday, October 9th at 9pm.

In 1953, Sir Edmund Hillary and Tenzing Norgay became international heroes by reaching the summit of Mt. Everest, accomplishing what many had tried before and failed. Their names went down in the archives of history, with Hillary now considered one of the most influential people of the twentieth century. But what if Hillary and Tenzing weren’t actually the first to reach the summit?  What if another group of explorers made it first?  Could history be wrong?

In an all new Discovery documentary, EVEREST’S GREATEST MYSTERY, a team of expert mountaineers undertake an epic adventure to solve the mystery of George Mallory and Andrew Irvine, two explorers who perished on their journey to Everest’s peak in 1924. EVEREST’S GREATEST MYSTERY premieres Sunday, October 11 at 9pm ET/PT on Discovery, as part of UNDISCOVERED, the new Discovery documentary strand that explores some of our greatest mysteries, potentially rewriting the history books along the way.  Two days before the EVEREST’S GREATEST MYSTERY premiere, Discovery will also spotlight the events that led to one of the most-deadly climbing seasons ever on Everest.   In the spring of 2019, the same group of explorers searching for Mallory and Irvine became first-hand witnesses to chaos and tragedy on the mountain.

In addition to watching the documentaries on Discovery, viewers can view by downloading the Discovery GO app. People can join the conversation on social media by using the hashtag #EverestsGreatestMystery and #ToLiveOrDieOnEverest and follow Discovery on Facebook, Instagram, and Twitter  for the latest updates.

After setting off on an expedition to summit Mt. Everest in 1924, carrying only essential tools and a Vest Pocket Kodak camera, George Mallory and Andrew Irvine disappeared. After the discovery of Mallory’s preserved body on the north face of the mountain in 1999 by a group of researchers, many have speculated whether the two explorers did indeed successfully summit the mountain before they perished. However, Irvine’s resting place – and with it, the famed Kodak camera – remain a mystery.  If found, and in salvageable condition, the developed film from their trek could have the potential to vindicate Hillary’s historic ascent in 1953 and rewrite the record books once and for all.

Journeying to the top of Everest to investigate the scene of a tragedy just shy of its peak, the team of expert explorers and climbers, led by Jake Norton, are tasked with settling one of the greatest debates of all time.   Norton is an avid Everest historian and, at just 25-years-old at the time, was one of the climbers who discovered the remains of George Mallory in 1999.  Collectively, Norton and his team have summited Everest 17 times, but this time they’re not on the mountain to reach its peak, but instead to unravel one of history’s greatest mysteries.

Using satellite images as a search guide, EVEREST’S GREATEST MYSTERY pieces together the clues and evidence that could lead to Irvine, the camera, and resolution once and for all.

While on the search expedition in the spring of 2019, the team experienced extraordinary weather conditions and severe overcrowding that proved to be nothing less than catastrophic, taking the lives of 11 people. Told through the eyes of the world's most experienced climbers, TO LIVE OR DIE ON EVEREST highlights exactly what it takes to survive a season like that and ponders the question if anything could have been done to prevent this tragedy.