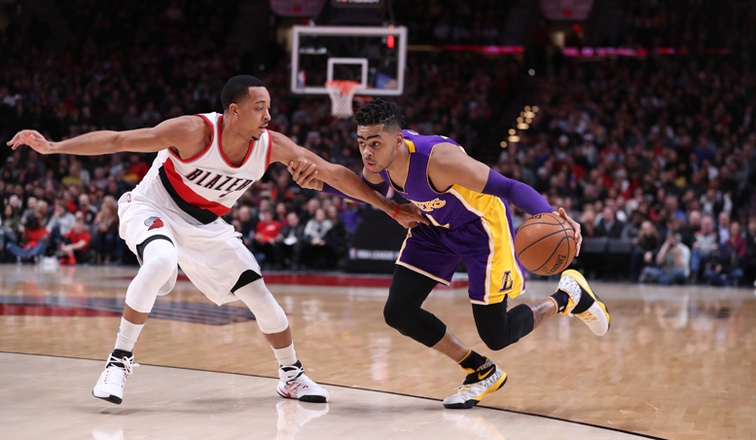 The Portland Trailblazers defeated the Los Angeles Lakers 118-109, in a game Los Angeles led by as many as 14 points. Since their optimistic 7-5 start, the Lakers currently sit with the most losses in the league at 13-26.

Damian Lillard returned from a five-game absence (ankle) to score 21 for Portland. CJ McCollum led the Blazers with 27 points and Evan Turner contributed 20 points off the bench, including 15 in the fourth quarter. D’Angelo Russell and Jordan Clarkson led the Lakers with 22 and 21 points respectively.

High expectations for top draft picks is a blessing and a curse in the NBA. Take Russell, for example, who despite struggling from the field (6-18, 0-8 from three) shot a season high 11 free throws, making 10 attempts. Trying to get to the free throw line is a common adjustment during an off shooting night, but an adjustment typically found in veteran players, not 20-year old point guards. Since college, Russell has displayed an advanced feel for the game, but with all his tools, he is not yet a finished product, which is as frustrating as it is exciting. Last night’s game is evidence that his crunch time decision making is still very much suspect.

Los Angeles took a 103-99 lead with 5:39 left to play after a pair of made free throws by Russell. Down four, Portland did not panic. The Blazers stuck to their motion sets, got everyone involved, kept loose balls alive, and attacked mismatches. After a Lillard three and a pair of McCollum buckets, Portland built a a four-point lead with four minutes left as the ‘BEAT L-A’ chants poured from the Moda Center faithful.

Meanwhile, the Lakers looked tight, almost like they had lost their legs. Their team oriented basketball which built a double-digit lead in the second quarter, became an individual, my-turn-your-turn show. With two minutes left and the Lakers down seven, Russell launched an inexplicable, contested, off the dribble three-pointer with 15 seconds still on the shot clock. This ill-conceived shot attempt gave Portland the confidence that their lead was safe. Next time down the court after a Portland turnover, Clarkson recovered a blocked shot and made the same poor decision to shoot another three-pointer. When Al-Farouq Aminu collected the miss, the nail was in the coffin.

Los Angeles played 42-minutes of good basketball Thursday night. Things fell apart when they abandoned their set offense and team-philosophy that built the lead. Being young, this team will struggle to make stops late. They’re inexperienced and typically play without a rim protector in crunch time, with Julius Randle at the center spot. To win, they must execute their offense, trust each other and stay commited defensively.

The Lakers have little time to regroup before they complete their back-to-back set with Miami at home tonight. Tip off is at 7:30pm PST.