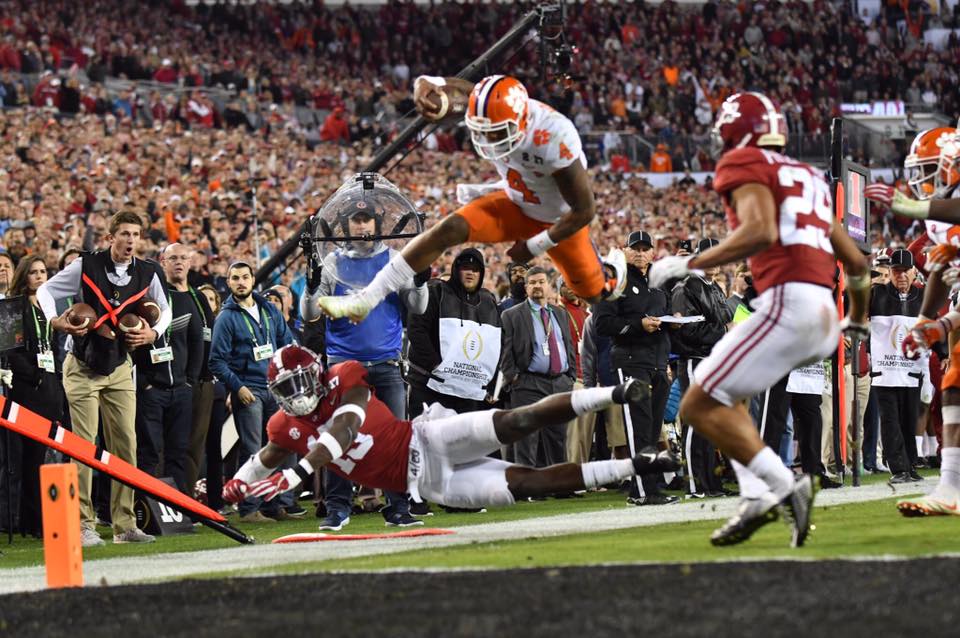 Every once in a while, the college football National Championship game matches its year long hype and leaves fans thinking “instant classic.” Even fans of the losing team are forced to admit, "at least that was a hell of a game." Clemson vs. Alabama was indeed one for the books.

The Clemson Tigers used a 21-point fourth quarter to defeat number one ranked Alabama 35-31 in Tampa Bay, Florida. Clemson captures its first national title since 1981, and Alabama just missed having a perfect season with consecutive titles.

Senior Quarterback Deshaun Watson has been the undisputed heart and soul of the Tigers since bursting onto the scene in 2014. Staying true to form, he led his team to the promised land Monday night. Watson passed for 420 yards and three touchdowns, and ran the ball a few times for good measure. He truly left it all on the field.

Momentum shifted in the third quarter after an unexpected punt by Watson placed Alabama’s offense inside their own ten yard line. Clemson forced Alabama into a quick three and out, and then capitalized on their field position with their second score of the game on a 24-yard touchdown catch by Hunter Renfrow.

The Crimson Tide responded on their next drive, but at a serious cost. Bruising running back Bo Scarbrough (93 yards, two touchdowns) left the game with an apparent leg injury during the series. And although freshman quarterback Jalen Hurts found tight end OJ Howard for a deep score soon thereafter, the Alabama offense was suddenly, and significantly, more vulnerable.

Clemson took a 28-24 lead after a one yard rush by Wayne Gallman. Hurts, who looked his age for most of the game missing receivers and firing deep too often, did manage to march his team down the field. He followed a big passing gain to Howard with an electric 30-yard scoring run to put Alabama ahead 31-28 with a little over two minutes remaining. Now, it was Watson’s time for greatness.

Watson began the winning drive with a big gain to his top receiver Mike Williams. He also found his favorite target Williams in single coverage by a smaller corner, so he heaved a jump-ball in his direction. Williams came down with the ball, placing the Tigers close to field goal range. Watson converted a pair of successive third downs–one to Rentfro and one to Jordan Leggett–and Clemson called timeout with first and goal and 14 seconds left to play.

Then, after a pass interference penalty, Watson rolled to his right–saw the Alabama defensive backs were caught in traffic–and softly tossed a pass to his slot receiver Renfrow. Clemson 35-31 with :01 on the clock.