The 2015 NFL Draft Descends On Chicago 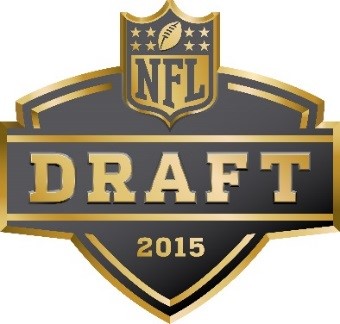 For the first time in 51 years, from April 30th to May 2nd, the NFL Draft is taking place in Chicago. Click here for the 2015 NFL Draft Order.

Grant Park has transformed into “Draft Town,” a huge exhibit for the thousands of fans and visitors coming to Chicago. The first team up on Thursday night are the Tampa Bay Buccaneers. Coverage can be seen at www.nfl.com and www.WatchESPN.com.

Thirty-two former players, one representing each team, will be featured for Round 2 presented by Bud Light to announce selections on Friday, May 1 beginning at 7:00 p.m. ET at the Auditorium Theatre of Roosevelt University.

The list of players scheduled to make selections includes six Pro Football Hall of Famers, with one from the Class of 2015. Combined, players on the list below have 22 Super Bowl championships and 92 Pro Bowl appearances.

On Wednesday, April 29 from noon to 2 p.m. ET in Chicago’s Pioneer Court, several former players including Pro Football Hall of Fame members WILLIE BROWN,DICK BUTKUS and DWIGHT STEPHENSON, amongst others, will welcome the 2015 Draft prospects at The Intro. The event is free and open to both fans and media.

Draft Town, presented by Oikos Triple Zero, will honor Chicago Bears great Walter Payton with one special fan activation, the Sweetness Simulator. Fans will get the opportunity to soar over the action just like “Sweetness” himself did in NFL games. The wind tunnel skydive simulator floats fans into the air so they can strike an iconic football pose in the heart of the windy city.