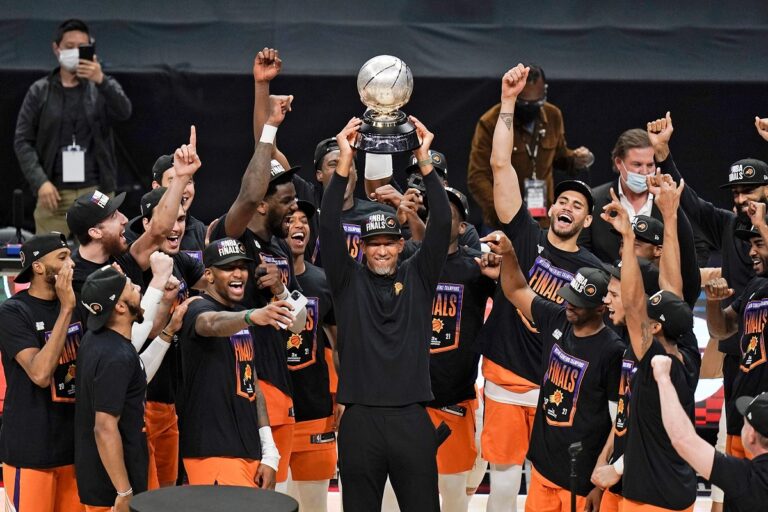 The Phoenix Suns, after missing the playoffs for 10 consecutive seasons, are headed to the NBA Finals for the first time since 1993.

This euphoric Suns season is about to hit its final push toward the franchise’s first NBA title. Phoenix is officially the Western Conference Champion after blasting the Los Angeles Clippers 130-103 in Wednesday’s Game 6 to clinch its first trip to the NBA Finals since 1993. The Suns await the winner of the Eastern Conference Finals series between the Milwaukee Bucks and Atlanta Hawks, which is tied 2-2 heading into Thursday’s Game 5.

With a 130-103 road rout of the Kawhi Leonard-less Los Angeles Clippers on Wednesday night, Phoenix won the Western Conference finals by four games to two and secured a berth in the finals, starting July 6 or July 8. They will face either the Atlanta Hawks or the Milwaukee Bucks, who are tied at two games apiece in the best-of-seven Eastern Conference finals.

The Suns failed to close out the series at home on Monday night when they had the chance, but Chris Paul, the former Clipper, made sure they didn’t squander another opportunity — clinching his first career trip to the finals in the process. Paul scored a career playoff high-tying 41 points, including 14 of his team’s 16 points in a game-breaking span bridging the third and fourth quarters, to turn the game into a runaway and provide a fitting capper to the Suns’ surge through the West.

“Out there on the floor talking to a few of the guys, they were, like, trying to figure out the feelings we were all having,” Coach Monty Williams said. “I remember being in those moments when I was in San Antonio. It’s hard to describe. You’re just grateful for it. We know we have more work to do, but it’s hard to describe it in the moment. …   “To be able to win a game like that is huge for the organization, the city, all of that stuff. That’s what I have in my heart right now, just a lot of gratitude.”