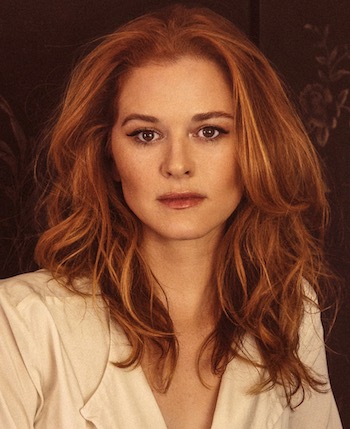 Reindeer Games follows a fading Hollywood star who returns to his small tight knit hometown post breakup.  He’s begrudgingly roped into the town’s holiday fundraising tradition, “The Reindeer Games,” but when he surprisingly falls for (and is competing against) a former classmate he ignored in high school who’s determined to beat him at all costs, he must win the game and win her heart as well.

Additionally, Drew will star in the newly greenlight original movie, Stolen Hearts: The Lizbeth Meredith Story (working title).  The movie follows the true-life story of Lizbeth Meredith (Drew), who finds herself fighting for her daughters after her ex kidnaps them and takes them to Greece.

“We are thrilled to have Sarah back with Lifetime in this powerful role as Lizbeth,” said Tanya Lopez, EVP Scripted Content, Lifetime & LMN.  “Sarah is such a versatile actress who is not only engaging and collaborative, but also a wonderful creative partner.”

“I’ve absolutely loved working with Lifetime over the past few years and couldn’t be more thrilled to continue my relationship with them as an actor and now as a writer and producer as well.  I'm delighted to announce my screen-writing debut with 'Reindeer Games,' a romantic comedy about love, loss, and the importance of true community.  I’m looking forward to working with Lifetime to bring more stories like this to life", Drew said.

Stolen Hearts: The Lizbeth Meredith Story tells the story of Lizbeth, a mother who says goodbye to her young daughters for a non-custodial visit with their father, her abusive ex-husband, only to discover days later that he has kidnapped the children and taken them to Greece. For the next 2 years, fueled by the memories of her own childhood kidnapping, Lizbeth travels to the White House and Greece, burning through every dime and favor to get her children back. One false move, and her ex-husband will vanish with her girls guaranteeing that Lizbeth will never see them again. Two false moves and he'll make good on his promise to kill her. But a mother's love knows no borders, and Lizbeth will risk everything to protect her daughters and bring them back home.

Drew has been a television mainstay for over 20 years. She’s currently starring in the new Apple TV series “Amber Brown” based on the best selling book series of the same name which is being helmed by Bonnie Hunt.  Drew is best known for her roles on the WB drama series Everwood , the mega hit medical drama, Grey’s Anatomy from creator Shonda Rhimes, and recent critically acclaimed Freeform Series, Cruel Summer.

This serves as a reunion for Drew and Lifetime, as Drew previously starred in two of Lifetime’s highest rated holiday movies, Twinkle All the Way and Christmas Pen Pals.