The Milwaukee Bucks Are 2021 NBA Champions 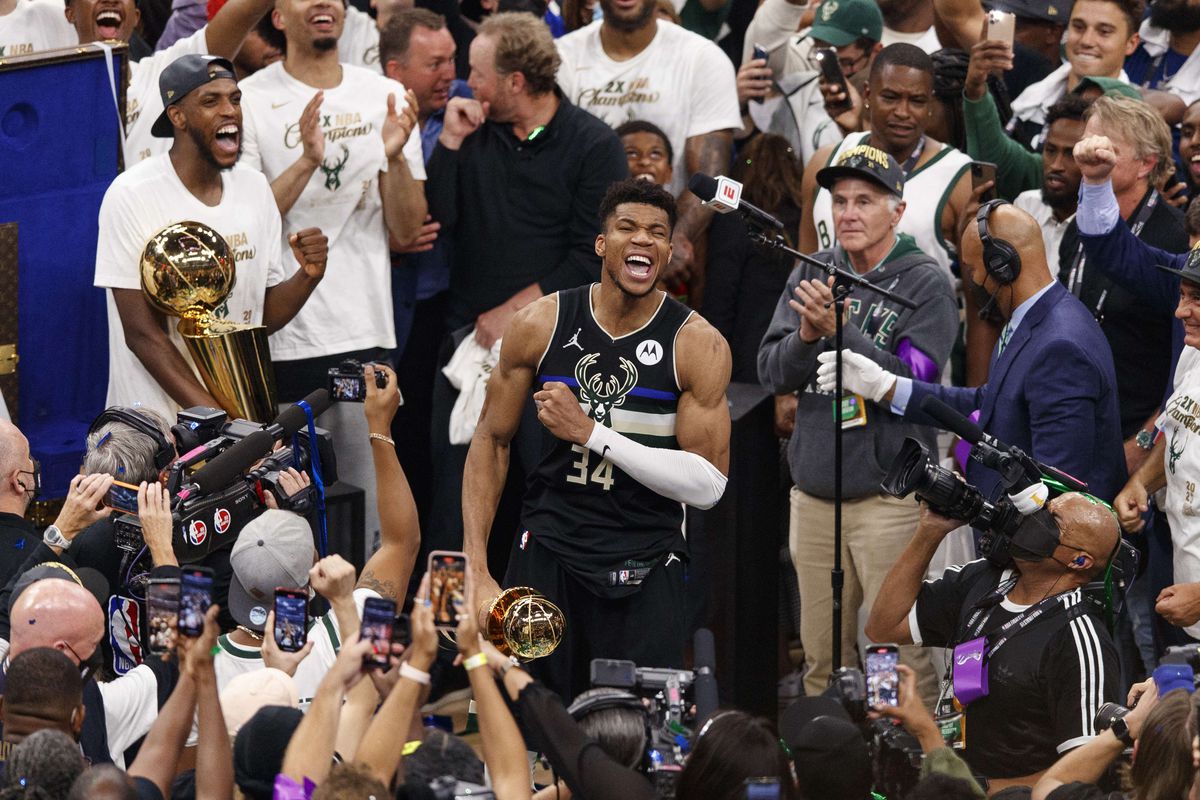 Giannis Antetokounmpo was crowned NBA Finals MVP after leading the Milwaukee Bucks to their first championship since 1971 in a six-game series win over the Phoenix Suns. The 26-year-old forward became the youngest player to win Finals MVP since Kawhi Leonard did so at the age of 22 in 2014. In his first Finals appearance, Antetokounmpo dominated by averaging 35.2 points, 13.2 rebounds and five assists per game. His remarkable combination of athleticism and skill overwhelmed the Suns, but before the series began, it wasn't even clear that he would be able to play.

Antetokounmpo hyperextended his left knee in the Eastern Conference finals against the Atlanta Hawks and missed the last two games of that series. He was initially listed as doubtful for Game 1 of the Finals, but fought his way back onto the court to play in all six games. He wasn't great in Game 1, scoring only 20 points in a loss, but he erased any doubt about his health with back-to-back 40-point performances in Games 2 and 3. Then, in Games 4 and 5, he gave the Bucks two of the most iconic plays in Finals history.

The Bucks led the Suns 101-99 with 1:15 remaining in the fourth quarter of Game 4. Antetokounmpo jumped out to defend Devin Booker off a dribble handoff, so Booker threw a lob up to DeAndre Ayton that should have tied the game. Antetokounmpo didn't let it. He turned around and managed to block Ayton's dunk attempt to preserve the lead and, eventually, the win.

Milwaukee needed another big play at the end of Game 5. Phoenix, which had trailed by as many as 14 points, had cut the deficit to one and Devin Booker had a chance to take the lead with around 20 seconds remaining. He drove into traffic, but was stripped by Jrue Holiday. In a frantic race up the court, Holiday hit Antetokounmpo with one of the most ambitious lob passes in postseason history. Antetokounmpo, being the physical freak that he is, caught it and slammed it down to cement Milwaukee's victory:

But Giannis saved his best for last. He scored an absolutely astonishing 50 points in the 105-98 Game 6 clincher to go along with 14 rebounds and five blocks. Perhaps most impressively, he made 17 of his 19 free throws after struggling at the line all postseason. It was one of the single greatest games in NBA history, and Antetokounmpo did it on his home floor.

The setting was appropriate. Antetokounmpo could have become a free agent this offseason and left Milwaukee like so many stars before him had done to their own small markets in pursuit of a championship. Instead, he chose to remain with the Bucks on a five-year deal, and the move paid off as he got to win the title he craved in front of the fans who have been cheering him on since Day 1. When he won the award, he started his speech by giving those fans credit. "I want to thank Milwaukee for believing in me," he said. "My teammates, man, they played hard every freaking game. I trusted this team. I wanted to do it here in this city. I wanted to do it with these guys, so I'm happy. I'm happy we were able to get it done."

He then went on to thank one teammate in particular, and it was the one he's been with the longest: Khris Middleton.

Middleton and Antetokounmpo have spent eight years together. They've grown from unheralded youngsters into Milwaukee legends together. Now, they're champions together. Antetokounmpo couldn't have done this without his favorite teammate, and with Middleton's help, he became the 2021 Finals MVP.