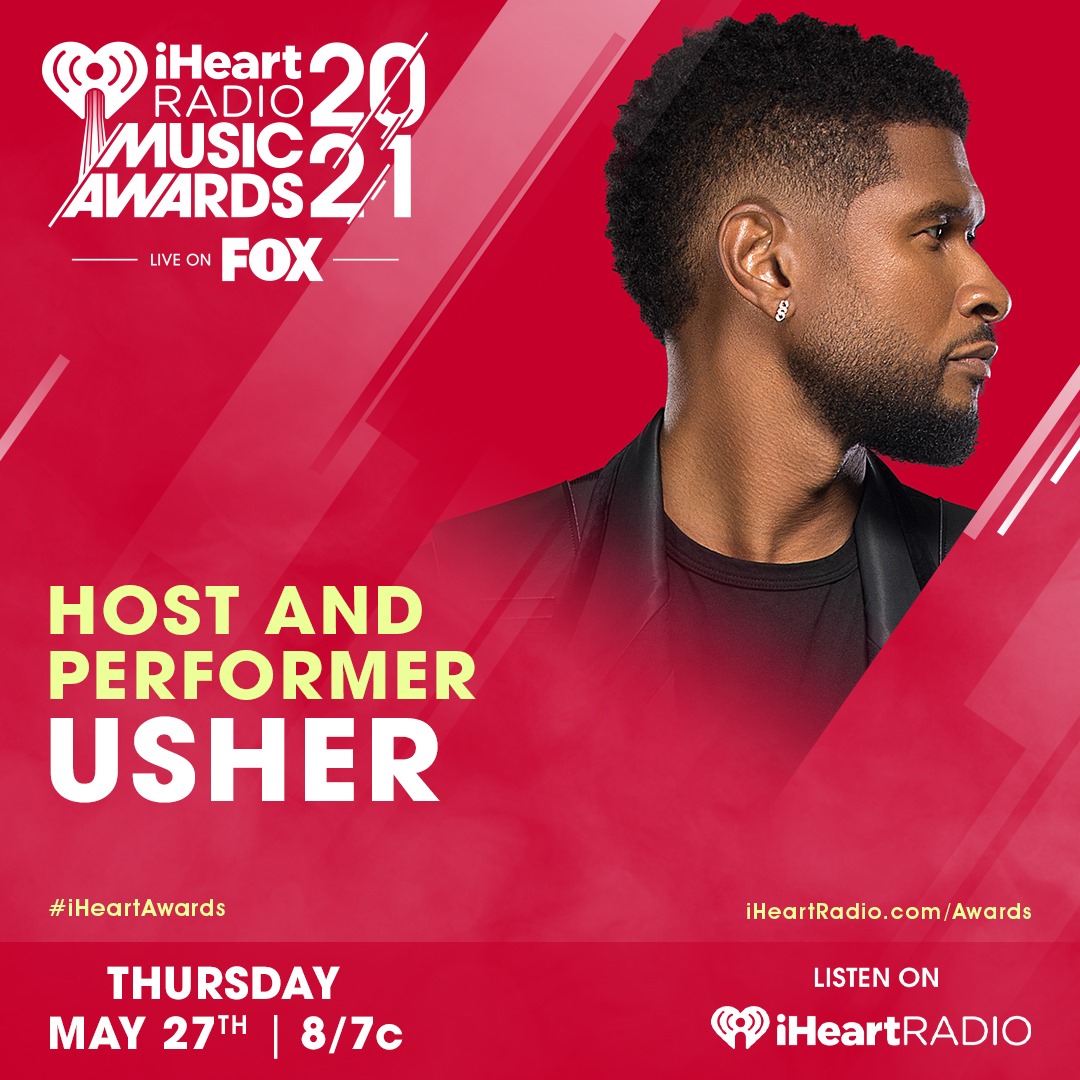 iHeartMedia and FOX announced today that Usher will host and perform during the 2021 iHeartRadio Music Awards. In addition, the event will feature performances from The Weeknd with special guest Ariana Grande, Bruno Mars & Anderson .Paak (Silk Sonic), Dan + Shay and Doja Cat, with more to be announced.

In addition, the event will feature appearances from Taylor Swift, Dua Lipa, Roddy Ricch, twenty one pilots, Megan Thee Stallion, and more. The event will air LIVE from The Dolby Theatre in Los Angeles, Thursday, May 27 (8:00-10:00 PM ET live / PT tape-delayed) on FOX. The event also will be heard on iHeartMedia radio stations nationwide and on the iHeartRadio app.

In addition, the legendary Elton John will receive the 2021 iHeartRadio Icon Award, which will be introduced by Chris Martin and Lil Nas X. The award also will feature a special tribute performance honoring Elton John’s global impact on pop culture, longevity, and continued relevance as a touring and radio force with a loyal fan base worldwide. Elton John is one of the top-selling solo artists of all time. With 1 diamond, 38 platinum or multi-platinum, and 26 gold albums, over 50 Top 40 hits, he has sold more than 300 million records worldwide and holds the record for the biggest-selling single of all time, “Candle in the Wind 1997.” As the recipient of the 2020 iHeartRadio Music Award for ‘Tour of the Year’, his Farewell Yellow Brick Road’ tour, encompasses 5 continents and over 350 dates, and marks his retirement from touring after more than 50 years on the road. In addition to music, he established the Elton John AIDS Foundation, which today is one of the leading non-profit HIV/AIDS organizations. Past honorees of the iHeartRadio Icon Award include Bon Jovi.

“I’m excited to be hosting and performing during the 2021 iHeartRadio Music Awards,” said Usher. “This year’s show includes an incredible lineup of exceptionally talented artists.  It’s going to be a great time!”

Now in its eighth year, the iHeartRadio Music Awards will celebrate the most-played artists and songs on iHeartRadio stations and the iHeartRadio app throughout 2020, while also offering a preview of the upcoming hits of 2021. The show will feature award presentations in multiple categories, live performances from the biggest artists in music, surprise stage moments and will tell the stories of the winning artists’ road to #1.  Since the Awards’ inception in 2013, the show has included live performances and appearances by superstar artists, such as Alicia Keys, Bruno Mars, Garth Brooks, Rihanna, Halsey, Justin Bieber, John Legend, Kacey Musgraves, Chris Martin, Bon Jovi, Maroon 5, Camila Cabello, Taylor Swift, Katy Perry, Ed Sheeran, Big Sean, Sam Smith, Madonna, Blake Shelton, Pharrell, Pitbull and many others.

For a full list of categories, visit iHeartRadio.com/awards. Additional categories include Label of the Year, Titanium Song of the Year and Titanium Artist of the Year, and individual winners for Album of the Year in music’s biggest genres, including Pop, Country, Alternative Rock, Rock, Dance, Hip-Hop, R&B, Latin Pop/Reggaeton and Regional Mexican formats. Nominations are based on consumption data, including streaming, album sales, song sales and radio airplay.

Social voting began April 7 and will close on May 19 at 11:59 PM ET for all categories. Fans can vote on Twitter using the appropriate category and nominee hashtags or by visiting iHeartRadio.com/awards.

Proud partners of the 2021 iHeartRadio Music Awards include Taco Bell®, Dr Pepper Zero Sugar and Rémy Martin with more to be announced.

Executive producers for the iHeartRadio Music Awards are Joel Gallen for Tenth Planet and John Sykes, Tom Poleman and Bart Peters for iHeartMedia.