Carol Channing’s Golden Globes Are Up For Auction 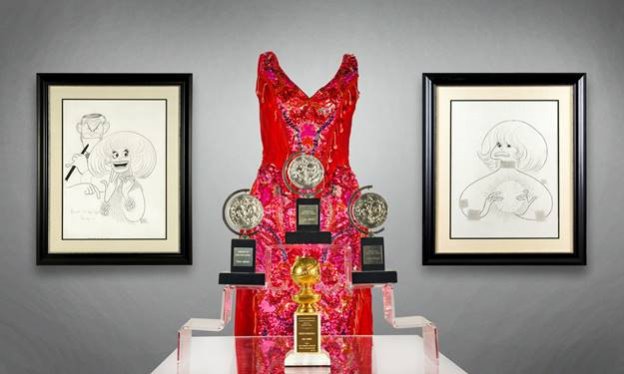 Fans and admirers of the legendary Broadway icon Carol Channing  may bid on one-of-a-kind pieces from her remarkable Southern California estate on Thursday,  June 17 at 10 a.m. PDT. The live online-only sale will feature treasured Tony, Golden Globe and lifetime achievement awards, as well as Broadway memorabilia, stage-worn costumes and a personal collection of original Al Hirschfeld drawings. A portion of the proceeds will benefit her alma mater Bennington College and Broadway Cares/Equity Fights AIDS.

Channing is best known for her enduring role as Dolly Levin in "Hello, Dolly!" (1964), for which she won her first Tony Award  for Best Actress in a Musical and later performed major revival runs, appearing in the play at least 5,000 times during her lifetime. Rising to stardom on her dazzling smile and comedic timing, her stage credits also include "Gentlemen Prefer Blondes" (1949), "Lorelei" (1974), "Sugar Babies" (1980) and "Jerry's Girls" (1984).

Channing's Broadway success led to many television appearances and movie roles, most notably, the film version of "Thoroughly Modern Millie" (1967), which landed her a Golden Globe Award. She was the recipient of many other prestigious honors, including two additional Tony Awards for Special Achievement (1968 and 1995) and the Oscar Hammerstein Award for Lifetime Achievement (2004). Distinguished as the first celebrity to perform at a Super Bowl halftime show in 1970, Channing was inducted into the American Theatre Hall of Fame in 1981.

Each personally owned article from Channing's estate captures a glimpse into her unique career, lifestyle and legacy. Highlighted pieces from the sale include four Tony Awards and an assortment of rare personal photographs and memorabilia, including:

"Abell is honored to offer a stunning collection from the premier Rancho Mirage residence of Carol Channing, admired as one of the most recognizable persons in the theatre world," said Senior Vice-President of Business Development Joe Baratta. "This is an opportunity for admirers and collectors from around the globe to acquire an item she treasured during her extraordinary life, honor her storied career and continue her legacy of supporting numerous charities."

An auction preview will be conducted by appointment only from June 7 to June 16 at the Abell gallery, 2613 Yates Ave. in Los Angeles. A complete catalog will be available on May 26 at www.abell.com. Buyers may place absentee bids with Abell directly, bid via telephone or bid online LiveAuctioneers.com and Invaluable.com. For more information, call 800.404.2235 or visit www.abell.com.