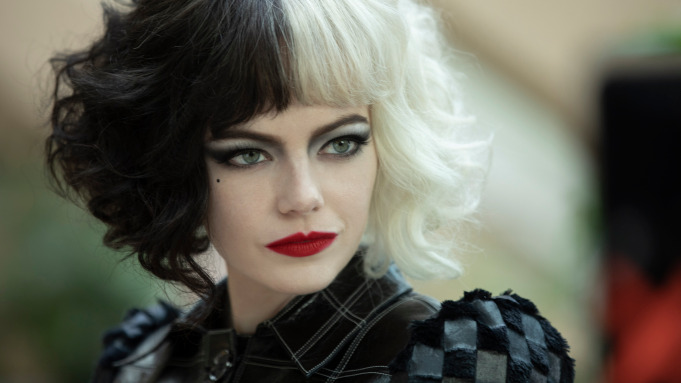 May 2021. Academy Award® winner Emma Stone (“La La Land”) stars in Disney’s “Cruella,” an all-new live-action feature film about the rebellious early days of one of cinemas most notorious – and notoriously fashionable – villains, the legendary Cruella de Vil. “Cruella,” which is set in 1970s London amidst the punk rock revolution, follows a young grifter named Estella, a clever and creative girl determined to make a name for herself with her designs. She befriends a pair of young thieves who appreciate her appetite for mischief, and together they are able to build a life for themselves on the London streets. One day, Estella’s flair for fashion catches the eye of the Baroness von Hellman, a fashion legend who is devastatingly chic and terrifyingly haute, played by two-time Oscar® winner Emma Thompson (“Howards End,” “Sense & Sensibility”). But their relationship sets in motion a course of events and revelations that will cause Estella to embrace her wicked side and become the raucous, fashionable and revenge-bent Cruella.

March 5th. Check out "Crafting Raya," a behind-the-scenes look at the making of  Disney's stunning, epic fantasy-adventure "Raya and the Last Dragon."  Join Kelly Marie Tran, Awkwafina and filmmakers to find out what inspired the story, characters and martial arts in the film, and how the film was crafted by extraordinary artists, talent and filmmakers all working from home.

March 5th. Trapped in a time loop that constantly repeats the day of his murder, former special forces agent Roy Pulver (Frank Grillo) uncovers clues about a secret government project that could unlock the mystery behind his untimely death. In a race against the clock, Pulver must hunt down Colonel Ventor (Mel Gibson), the powerful head of the government program, while outrunning skilled ruthless assassins determined to keep him from the truth in order to break out of the loop, save his ex-wife (Naomi Watts) and live once again for tomorrow.

Check out the new trailer for Marvel Studios' "The Falcon and The Winter Soldier.".  The all-new, six-episode series debuts exclusively on Disney+ March 19, 2021.

Mena Suvari faces danger at Paradise Cove. Todd Grinnell ("One Day at a Time") and Kristin Bauer van Straten ("True Blood") also star in the  Martin Guigui-directed thriller, the story of a contractor and his wife who move to Malibu to flip his mother's beach house and are terrorized by the deranged homeless lady living under the house. Written and executive produced by Sherry Klein, and directed by award-winning filmmaker Martin Guigui (Beneath the Darkness, The Bronx Bull), Paradise Cove premieres on digital Feb 12 from Quiver Distribution.