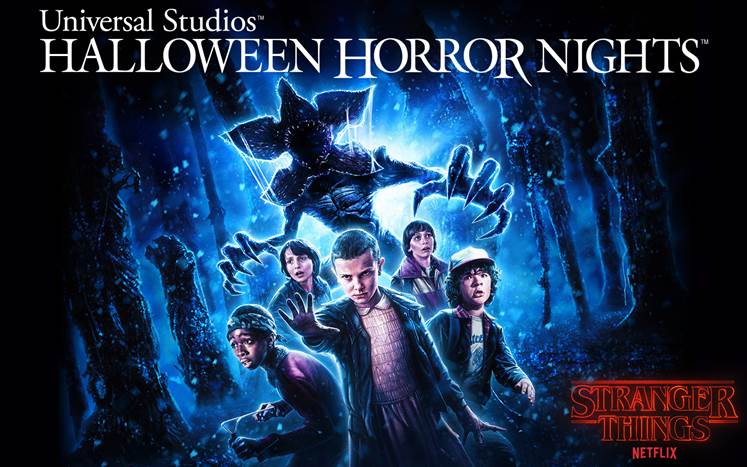 Yes, before we know it, Halloween will be here! Let's just prepare ourselves for the amazing mazes and attractions that will be this year's Universal Studios’ Halloween Horror Nights’ with the first look reveal of the “Stranger Things” maze key art designed exclusively by Kyle Lambert, the official illustrator of the mega-hit Netflix original series!

Featuring the series’ cast standing adjacent to the predatory Demogorgon, the ominous image depicts a nearly palpable account of what guests can expect to experience when the “Stranger Things” maze debuts as part of “Halloween Horror Nights” this fall.

The parallel universe, referred to as the Upside Down, that terrorized the small town of Hawkins, Indiana in “Stranger Things,” will bring the chittering, predatory Demogorgon to “Halloween Horror Nights” to stalk unwitting guests as they encounter iconic scenes, characters and environments from the mesmerizing series.

Working collaboratively with Netflix, along with the creators and executive producer of the blockbuster series—Matt Duffer, Ross Duffer and Shawn Levy, the mazes will be authentic representations of “Stranger Things,” designed to transport guests into artfully recreated scenes and storylines. From the menacing Hawkins National Laboratory, under the U.S. Department of Energy, to the Byers home adorned with an erratic display of flashing Christmas lights and the eerie Upside Down woods oozing a shower of floating orb-like spores, the chilling new mazes will offer surprising twists and unexpected turns around every corner.

As previously announced, “The First Purge” maze is coming... based on Universal Pictures’ all-new thriller that unleashed the country’s inaugural government-sanctioned lawlessness, making all crime legal once a year for 12 hours.

Murder, mayhem and pandemonium are alive and well every year as the annual Purge grips the country, suspending all police, fire and emergency services for 12 consecutive hours as law abiding citizens are transformed into anarchists. Inspired by The First Purge—the movement that began as a simple experiment, this terrifying new “Halloween Horror Nights” maze aligns with the film in establishing the motives that launched the country into chaos.

For tickets and dates visit: https://www.halloweenhorrornights.com/hollywood/2018/