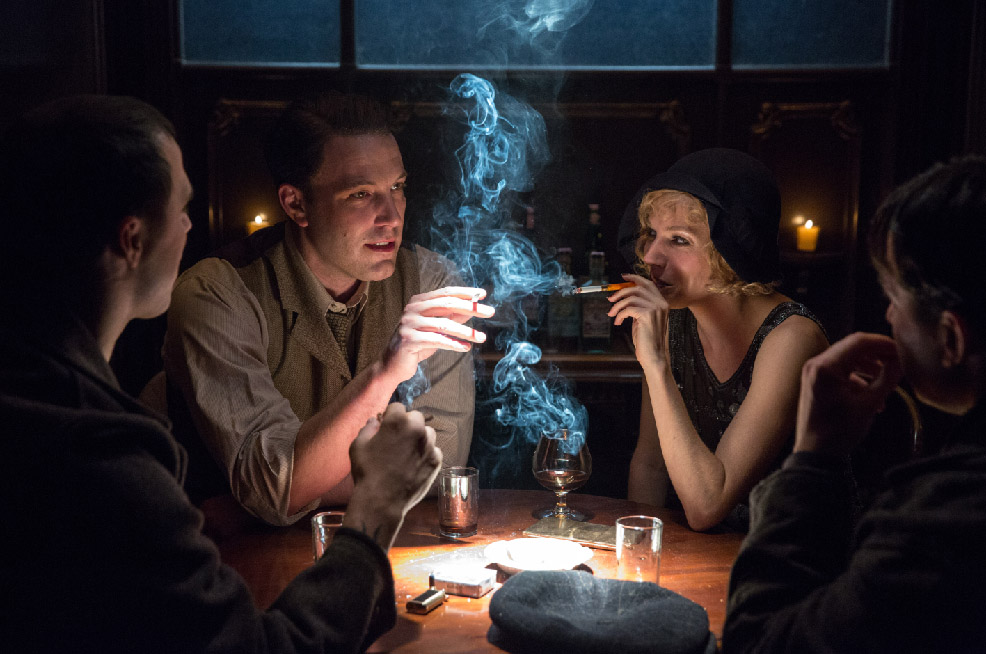 With his fourth picture, Ben Affleck turns back the clock to the Prohibition era to portray a small-time Boston hood sent to Florida to oversee a local mafioso’s bootlegging business in Live By Night, a slick homage to classic Warner Brothers gangster films.

With his second adaptation of a novel by Boston crime author Dennis Lehane (Gone Baby Gone), this artfully rendered period piece, a passion project of Affleck’s, is a fun and flashy, if vexingly conventional, ode to the days of tommy guns and bathtub gin. Sticking to the genre’s well-worn formula, which has changed surprisingly little since the Pre-Code days of Jimmy Cagney smashing grapefruits in women’s faces, Affleck’s adaptation has all the necessary elements one looks for in such a picture, yet somehow still winds up feeling like an imitation instead of the real deal. Still, with some sharp and grimly funny dialogue, strong supporting work from the diverse cast, and a narrative full of shootouts, double-crosses and reckless romance, Live by Night suffices as a compelling crime drama that captures the glitz, glamor and peril inherent to the gangster life.

Joe Coughlin (Ben Affleck) is a disillusioned WWI vet who, much to the displeasure of his cop father (Brendan Gleeson), has dedicated his post-war years to the outlaw life, robbing banks and backroom card games around Boston. Despite his criminal endeavors, Joe refuses to work for either the Irish mob, led by Albert White (Robert Glenister), or the North End Italians, led by Maso Pescatore (Remo Girone), who are in the midst of a gang war. But when White discovers that his girlfriend (Sienna Miller) has been stepping out with Joe, he takes measures that leave Coughlin nearly dead and filled with vengeance.

Three years and a prison term later, Joe, hardened by his time behind bars, is ready to fully commit to the gangster life. So when Pescatore approaches Joe to oversee his rum-running operation down in Tampa, he puts on his finest fedora and heads South. Along with his right hand man, Dion (Chris Messina), Joe quickly makes his presence known, aligning himself with the influential nightclub owner and materials supplier Esteban Suarez (Miguel) and running White’s operation out of town. However, the local branch of the KKK doesn’t take kindly to Joe’s newfound power, leading to speakeasy shootings, profit cuts, and problems with a local judge (Chris Cooper). On top of making enemies out of the Irish mob and the KKK, when Joe’s grand plan to open a casino and legitimize the booze biz falls flat, he falls out of favor with the Italians, turning his situation from bad to worse.

As for the script, while Affleck incorporates enough drama to keep the proceedings engaging, the storyline is far too busy, leading to some sketchy subplots that feel rough around the edges. Two examples of these ill-considered narrative strands are the romantic plotline between Affleck and Sienna Miller’s sassy lass, which comes across as patently false, and the eventual alliance between the KKK and the Irish mob, which plays out far too conveniently. That said, the lush cinematography and abundance of action succeeds in distracting audiences from the script’s weaknesses.

As bootlegger kingpin Joe Coughlin, Ben Affleck exudes the right mixture of charm, menace and ambivalence that the role necessitates, even if moments arise when his character behaves contradictorily and his motivations are unclear. And while Affleck’s name will undoubtedly be left out of the Best Actor conversation, it’s a perfectly agreeable and dedicated performance befitting a genre film like Live by Night. Although Affleck is in virtually every scene, there’s still ample space for some supporting actors to shine, most memorably Chris Messina as Coughlin’s enthusiastic enforcer Dion, Chris Cooper as a Tampa judge with KKK ties, and Elle Fanning as Cooper’s beloved daughter, a fallen angel-turned-preacher who throws a wrench in Coughlin’s casino plans. Unfortunately, Zoe Saldana is subjected to a fairly one-note role as Coughlin’s Cuban bride, and Sienna Miller’s talents are similarly squandered in the role of an immoral gangster girlfriend.

Those looking to satisfy their appetite for a good old-fashioned gangster flick will find fulfillment in Live by Night.

Rated R for strong violence, language throughout, and some sexuality/nudity.