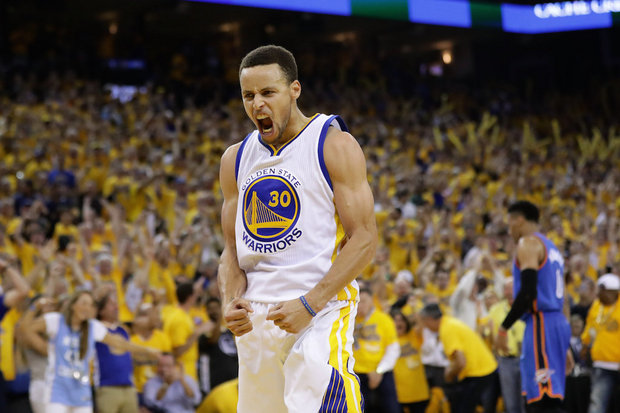 The Golden State Warriors are now the first team to go down 3-1 in the conference finals and come back to make the NBA Finals since the Boston Celtics in 1981. If they go on to win the championship, this unlikely series victory will only add to their legend. The Warriors got themselves in trouble early in the conference finals with lackluster play in the first game when the Oklahoma City Thunder stole home court at Oracle Arena in Oakland losing 108-102. They rebounded with a game two win, but proceeded to lose 2 straight in Oklahoma. The 73-win juggernaut faced three straight elimination games to keep their dream season alive. And keep it alive they did, when the splash brothers caught fire in the seventh and deciding game after 2-time MVP Stephen Curry (7-of-12) and Clay Thompson (6-of-11) followed the latter’s record-setting 11 three-pointers in Game 6 with 13 of the Warriors’ 17 total three-pointers.

The greatest outside-shooting duo in league history made several extremely tough jumpers and carried the Warriors through several weak offensive periods, keeping pressure on the Thunder when they could have taken control early. It was only fitting that Curry came through with the series-clinching dagger, making this three-pointer in the final 30 seconds to give the Warriors an insurmountable lead. They will now enter a highly anticipated Finals rematch with the East champion Cleveland Cavaliers, led by LeBron James, having proved their ability to overcome adversity, defy extreme odds, and continue to win with the sort of three-point shooting that the sport has never seen before. Game one is scheduled for Thursday night in Oakland with the Warriors being the odds-on favorite according to Las Vegas.