Stop Ivory Launches PSA Campaign To Save Elephants With Tarzan 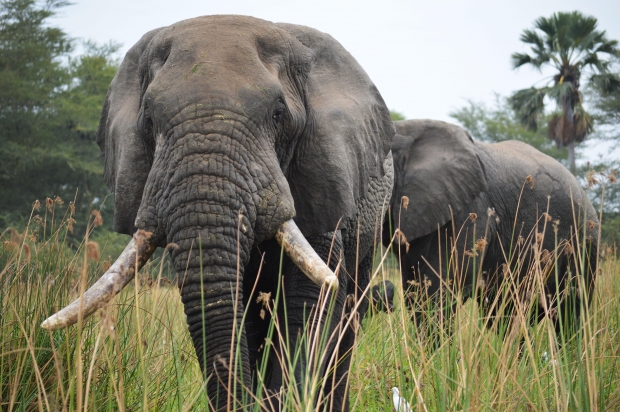 Since the Victorian era in which The Legend of Tarzan unfolds, the overall population of elephant species in Africa dropped from 19 million to just 500,000, stresses a new PSA by nonprofit group Stop Ivory featuring the film's stars, Alexander Skarsgard and Margot Robbie. The organization is raising the volume on the plight of endangered African elephants, a magnificent species hunted for their ivory.

In theaters today, the action adventure The Legend of Tarzan is joining the fight, as much of the movie's backdrop was captured in Gabon, home to many endangered species, including the African forest elephant. The movie is receiving attention for the untapped beauty and diverse landscape of the Gabonese rainforest, home – and last hope – for roughly half of the world's remaining 100,000 forest elephants.

In the new PSA, launched in partnership with Warner Bros., Skarsgard and Robbie, who play the film's Tarzan and Jane, are raising awareness about the harsh truths of ivory poaching, revealing that, without immediate action, the remaining forest elephant population could be gone in a decade.

"We're facing an immediate crisis as the population of forest elephants dwindles to a dangerous level due to the continued threat of poachers," said Josh Ponte, a Director with Stop Ivory, who also served as the African technical advisor on the film. "Through this partnership, we are providing an international platform for Stop Ivory's Elephant Protection Initiative, which seeks to stop the illegal trade of ivory."

The recently announced partnership also aims to promote the successful conservation work being done in the African country of Gabon, where crews spent six weeks shooting scenes for the film – a first for Hollywood.

"Gabon was a founding member of the Elephant Protection Initiative, recognizing the important role the country's landscape plays in the protection of the majestic forest elephant," said Lee White Director of Agence Nationale des Parcs Nationaux (ANPN). "Since its founding, ANPN has continued to support initiatives and enforce wildlife laws that will safeguard Gabon's environment and wildlife."

ANPN is comprised of 13 national parks that safeguard more than 5 million acres of forestry, helping to conserve the diverse ecosystems and wildlife of Gabon. ANPN employs 700 – including a wildlife police force known as ecogardes – tasked with overseeing protection of the national parks and its wildlife. Since 2010, Gabon's ecogardes have arrested more than 6,000 individuals involved in the illegal trafficking of ivory and other natural resources.

For more information, please visit stopivory.org or connect to @Gabon_Nature on Twitter and @Gabon Nature on Facebook.