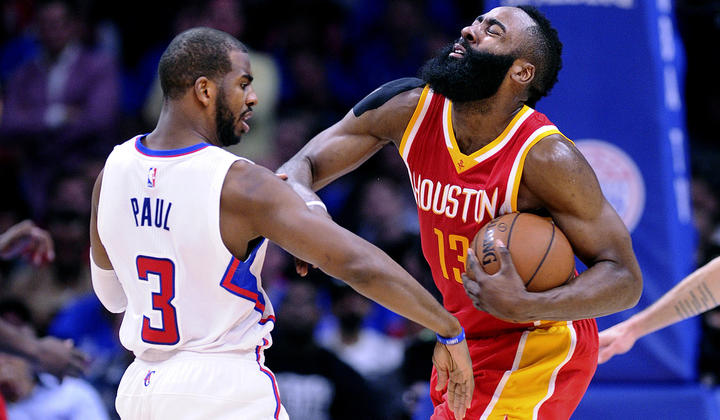 A funny thing happened on the way to the Western Conference semi-finals between the Los Angeles Clippers and the Houston Rockets: only one of the teams has shown up to play. The once dominant-looking Rockets have been reduced to a team without any direction on either side of the floor. They are defenseless against the Clippers pick-n-roll and have no answers for Blake Griffin. And they have certainly made a case for the supporters to get rid of the hack-a-player defense, with DeAndre Jordan shooting a ridiculous 28 free throws in the 1st half alone, a playoff record, and a total of 34 in game 4. The strategy designed to knock L.A. out of rhythm instead took the flow out of the Rockets until Houston had been embarrassed by a 128-95 loss Sunday night at Staples Center. Kevin McHale is looking like a coach without a clue as he started the hack-a-Jordan just 3 minutes and 40 seconds into the first quarter. The strategy backfired as it only stunted the Rockets defense and kept them without any flow or consistency on offense.

Meanwhile, the Clippers still shot 49.4 percent and scored 128 points. And it wasn’t from running up the score in the garbage-time fourth quarter either — they had 103 at the end of the third. Guard James Harden said, “Yeah, we’re not really moving, we’re not really moving on the offensive end. We’re pretty much stagnant, so it makes it easier for them to kind of load up and play their normal defense ...” The much slower pace, with constant breaks, allowed the Clippers to play Chris Paul more than they anticipated in his second game back from a strained hamstring. He logged 26 minutes, but only because the blowout allowed him to spend most of the fourth quarter on the bench. With a series lead of 3-1, The Clippers are 1 game from making history for the franchise with their first ever appearance in a Western Conference Finals. The woebegone Rockets are headed back to Houston where they will try to regroup, stave off elimination and keep their season alive for one more game on Tuesday night at the Toyota Center.