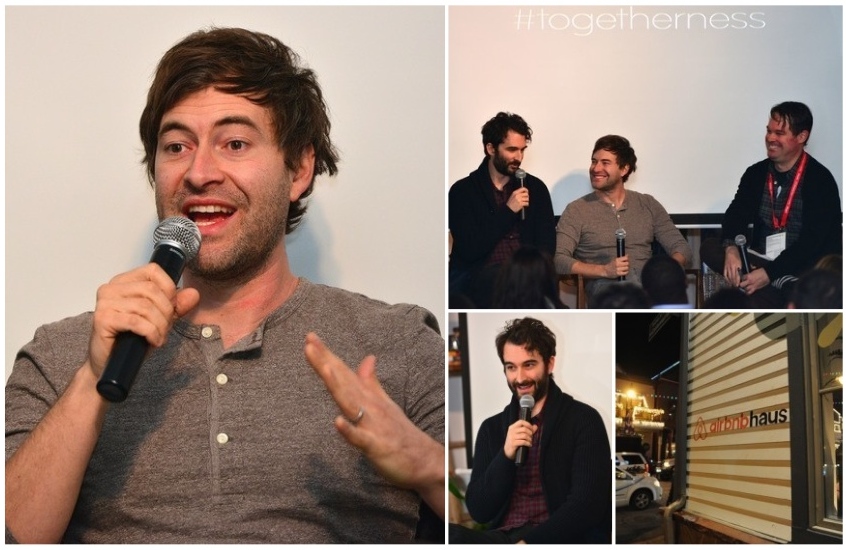 The Duplass brothers are everywhere. Starring in and producing the most buzzed about independent films throughout the past several years, making development deals with Netflix, and of course airing their HBO Series “Togetherness.” Mark and Jay show no signs of slowing down. Jay is still part of the Golden Globe winning “Transparent” on Amazon and Mark is still starring on “The League” on FXX. They have 3 films at this year’s festival, and on Monday, they’re premiering a new TV show called “Animals,” which the brothers are hoping to sell.

Over the weekend the brothers spoke at the Airbnb Haus panel during the 2015 Sundance Film Festival in Park City, Utah.

They started off by joking that perhaps next year Sundance would be titled, the Duplass Film Festival. No one would be surprised.

During the Q&A, the pilot of “Togetherness,” which aired earlier this month. Playing out like one long movie, the show is equal parts dramatic, nuanced, heartbreaking, and funny.

With their TV careers soaring to high altitudes of success, the brothers spoke about the realities of producing, budgeting and much more. Here are some highlights:

“The high odds are that you’ll spend two to three years developing and shooting a pilot that will never air.”

“We’ve been interested in this concept of independent television where we foster a TV show and just make the thing.”

“When you make a show or a movie it’s like “Frankenstein,” it threatens to kill you every day. It’s charging around and costing you money and everything is a scary and dramatic experience when you’re on set.”

“[On TV] There was never this pressure to open big on box office weekend. It’s very stressful – and we would always feel like we were letting ourselves down or the people in the movie if we didn’t perform on opening weekend. With a TV show, particularly one on HBO that is really not about ratings – it’s about curating a group of shows that all feel like something people want to pay to subscribe to. It really is nice to not have that pressure.”

“Try to keep a lid on the budget so you can have realistic expectations for success.”