"Get Her Back" With Flowers By Robin Thicke 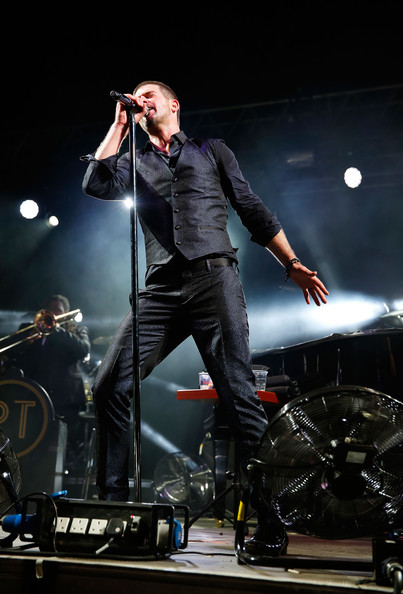 When you want to “Get Her Back” or profess your “Forever Love,” you can now do it not only by playing the Robin Thicke singles of the same name but by offering romantic bouquets of roses also named after those songs. Teaming with the singer-songwriter, 1-800-FLOWERS.COM is naming a bouquet after the platinum-selling, Grammy-nominated Thicke’s current single, the heartfelt “Get Her Back,” as well as one after his soon-to-be-released single “Forever Love.” Both tracks can be heard on Thicke’s new album on Star Trak/Interscope Records. Customers purchasing either bouquet will receive a digital download of the album after its release.

The classic “Forever Love” bouquet includes either one dozen or 18 premium long-stem red roses artistically designed by expert florists with fresh greens and presented in a ruby red vase for either $64.99 or $89.99. The spectacular and luxurious “Get Her Back” bouquet features 100 premium long-stem red roses in a clear vase and sells for $349.99. 1-800-FLOWERS.COM will support the brand partnership through marketing efforts.

One of the most respected vocalists in contemporary pop, soul and R&B, Thicke premiered “Get Her Back” at the 2014 Billboard Music Awards, where he won Top Hot 100 Song, Top Digital Song, Top Radio Song, and Top R&B Song for “Blurred Lines,” featuring T.I. and Pharrell Williams.  The new album titled PAULA will be Thicke’s seventh, following last year’s Blurred Lines, which debuted at No. 1 on the Billboard Top 200 chart propelled by the success of its title single.  “Blurred Lines” climbed to No. 1 in more than 100 countries and spent 12 weeks atop the Billboard Hot 100. It also broke radio records by climbing to No. 1 on five charts simultaneously (Top 40, Rhythm, Urban, Hot AC and Urban AC) — the first time any artist has accomplished that feat.