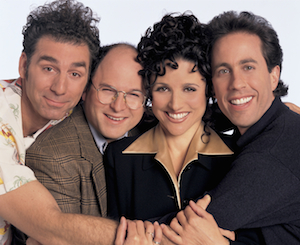 TBS will celebrate the 25th anniversary of Seinfeld – considered by many television critics to be the funniest sitcom ever created – with an entire week featuring the 25 most popular and acclaimed episodes. The celebration will take place Monday, June 30 – Saturday, July 5, with four episodes each weeknight, beginning at 6 p.m. (ET/PT). TBS's Seinfeld anniversary celebration will climax on July 5, the 25th anniversary of Seinfeld's first telecast, with five episodes widely considered to be the most memorable, including "The Contest," "The Outing," "The Junior Mint," "The Puffy Shirt" and "The Yada Yada." The Saturday lineup is set to begin at 5:30 p.m. (ET/PT).

TBS's weeklong Seinfeld collection includes such episodes as "Shower Head" on Monday; "The Chinese Restaurant" and "The Serenity Now" on Tuesday; "The Bubble Boy" on Wednesday; "The Strike," "The Soup Nazi" and "The Merv Griffin Show" on Thursday; and the two-part episode "The Boyfriend" on Friday. Throughout the week, TBS encourages Seinfeld fans to chat about their favorite Seinfeld moments and episodes on social media using #Seinfeld25.

A complete lineup of TBS's 25th anniversary celebration of Seinfeld is included below:

Monday, June 30
6 p.m. – "The Pen" – Jerry accepts a gift his parents wanted him to refuse.
6:30 p.m. – "The Bizzaro Jerry" – Elaine's soon-to-be former beau has two friends who resemble George and Kramer.
7 p.m. – "The Jimmy" – Jerry suspects his dentist and hygienist are living out their fantasies at his expense.
7:30 p.m. – "Shower Head" – Jerry jokes about his uncle on television; Elaine fails a drug test. Guest-starring Jay Leno.

Wednesday, July 2
6 p.m. – "The Hamptons" – Jerry's girlfriend sees George naked during a weekend at the beach.
6:30 p.m. – "The Opposite" – George learns success lies in doing the opposite of what he would normally do. Guest-starring Dedee Pfeiffer, Regis Philbin, Kathie Lee Gifford and French Stewart.
7 p.m. – "The Bubble Boy" – Jerry gets lost en route to visiting a sick fan. Guest-starring Jessica Lundy.
7:30 p.m. – "The Pez Dispenser" – George worries about gaining the upper hand in his current romance.

Lifestyle
Southwest Flies On The Shark Week Wagon With Discovery