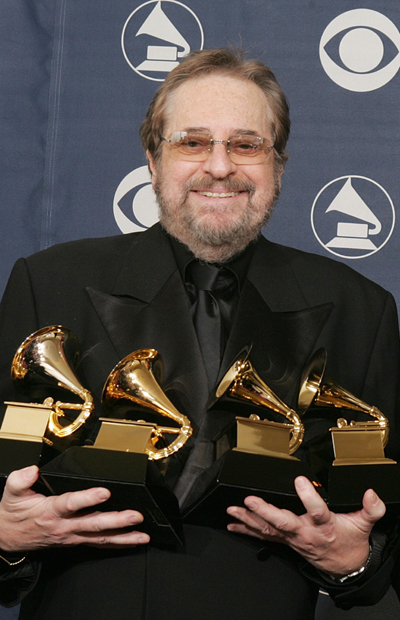 Seen in this photo are just four of the fourteen Grammy Awards that legendary music producer, Phil Ramone won throughout his illustrious career. On March 30th, the music industry said goodbye to one of its most beloved and talented producers. Ramone passed away at age 79 and although the cause of death was not confirmed, it was reported that the producer was admitted to the hospital in late February due to an aortic aneurysm.

It would take a book to list all of Ramone’s accomplishments but his success started in 1959 when he founded the independent recording studio A&R Recording. He was responsible for producing some of the most legendary artists of every music genre: John Coltrane, Barbra Streisand, Bob Dylan, Natalie Cole, Billy Joel, Elton John, Liza Minnelli, Frank Sinatra, Rod Stewart, Karen Carpenter and so many more.

He won his first Grammy in 1975 for Paul Simon’s, “Still Crazy After All These Years.” The hits continued when he produced Billy Joel’s breakthrough album, “The Stranger,” and Frank Sinatra’s “Duets.”

Barbra Steisand worked closely with Ramone on soundtracks such as “A Star is Born” and “Yentl.” In remembering the producer she said in a statement, “His brilliance at capturing sound was immediately evident. Phil had impeccable musical taste, great ears and the most gentle way of bringing out the best in all the artists he worked with. The monumental recordings he produced will endure for all time.”

Later in his career, Ramone shifted from production to serving as chairman of The Recording Academy.

Neil Portnow, president/CEO of the Recording Academy said, “Our industry has lost an immense talent and a true visionary and genius, and The Academy has lost a very dear and close friend. [Ramone] was a prolific and legendary producer, engineer, and composer who made countless significant contributions to the recording industry. As co-founder of A&R Recordings, he was a pioneer of audio technological developments, creating new innovations for the compact disc and surround sound technologies. Everyone who encountered Phil came away a better person for it, professionally or personally.”

Ramone’s legacy will live on through his music and the countless artists he produced.