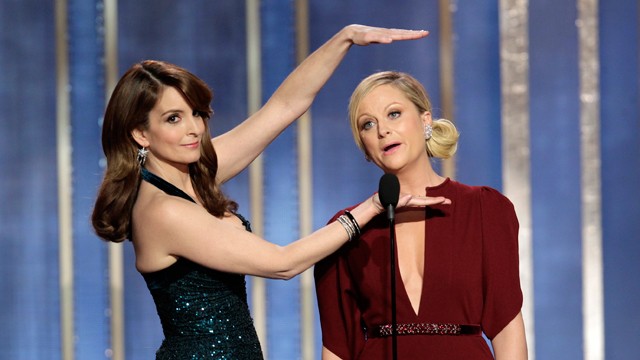 So many award shows turn into a long-winded three to four hours of boredom. The jokes tend to be bland and everyone is glancing back and forth between the TV and their watch. That was not the case with the 70th Annual Golden Globe Awards. SNL favorites and hosts Tina Fey and Amy Poehler pulled it off. The night was filled with highly entertaining celebrity slams and zingers (none too offensive, but offensive enough to be clever and funny), goofy disguises and some off-key singing. Will Ferrell and Kristen Wiig proved to be the most hilarious presenters of the evening after their improvised rant introducing the nominees for Best Lead Actress in a Comedy or Musical. As Tina Fey promised, they’d try to “wrap it up by eleven dark thirty at the latest.” Hopefully the comedic duo will be invited back to host next year.

Highlighted jokes from the evening:

“Meryl Streep couldn’t be here tonight. She has the flu. I hear she’s AMAZING in it.”

Tina Fey to Anne Hathaway: “I have not seen someone so alone and abandoned like that since you were on stage with James Franco at the Oscars.”

To Kathryn Bigelow on ZERO DARK THIRTY: “When it comes to torture, I trust the lady who spent three years married to James Cameron.”

“Quentin Tarantino is here, the star of all my sexual nightmares”

At the end of the evening: “We’re both going home with Jodi Foster tonight.”

While Tina and Amy were winners tonight. The REAL Golden Globe winners were: