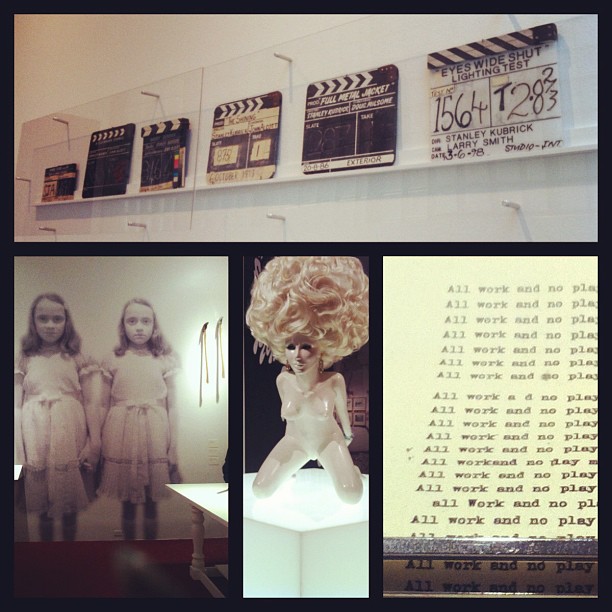 It can’t be easy to design an exhibit which illustrates a career that spanned over 40 years. Leave it to the LACMA to deliver a fascinating and educational exhibition on one of the most admired filmmakers of our time. The museum along with the Academy of Motion Picture Arts and Sciences co-presents the first U.S. retrospective of Stanley Kubrick. The exhibit runs until June 30, 2013. Spartacus, Lolita, A Clockwork Orange, The Shining; each room is themed to Kubrick’s legendary films. Whether it was intentional or not, I saw the layout as a reflection of the maze from The Shining.
Kubrick’s films are represented through a thoughtful selection of archival material, annotated scripts, photography, costumes, cameras and equipment, set models, original promotional materials, and props. The interdisciplinary exhibition draws attention to Kubrick’s fixation with historical research and his visionary adaptations of influences from the fine arts, design, and architecture, and enables visitors to experience the cinematic journey of one of the great artists of the twentieth century.

While visiting the Kubrick exhibit, I stepped into the Resnick Pavilion to view BODIES AND SHADOWS: CARAVAGGIO AND HIS LEGACY. This is a brilliant exhibit devoted to the legacy of the dark and enigmatic artist, Michelangelo Merisi da Caravaggio. Known for his rebellious and violent temper, his paintings reflect his mood. Caravaggio’s striking realism, violent contrasts of light and darkness, and ability to express powerful emotions were as surprising to his contemporaries as they are to us today. In this exhibition many of the innovations introduced by Caravaggio were adopted by painters from different countries, backgrounds, and influences.

Fifty more paintings document his influence on a host of painters from France, Spain, and the Netherlands, including Georges de La Tour, Gerrit van Honthorst, Velázquez, and Simon Vouet. After years of seeing Georges de La Tour’s “The Magdalen with the Smoking Flame” in book and slide illustrations, nothing compares to the original memento mori painting. The exhibit runs until February 10th, 2013.
I recommend making a day of it at the LACMA. Don’t miss these wonderful exhibits. www.lacma.org