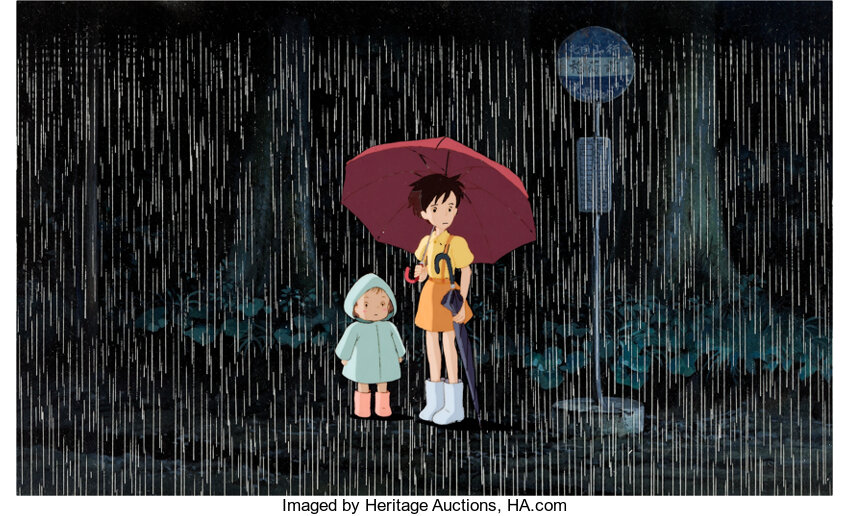 The world's first auction dedicated to the art of anime set multiple world records at Heritage Auctions, June 25-27, as bidders drove sale prices of animation cels from the genre's most iconic and award-winning films to more than $2.1 million.

The Art of Anime and Everything Cool Auction attracted a record 2,853 bidders from around the globe and they were impressed with what they found: The sale boasted sell-through rates of 100 percent by value and 99.8 percent by lots sold. Record-breaking prices were set for collectible cels from films such as My Neighbor Totoro, Princess Mononoke, Kiki's Delivery Service and AKIRA.

"The hits and big moments in this sale came from all over," Heritage Auctions Animation Art Director Jim Lentz said. "Record breaking prices were seen for lots from Astro Boy, Dragon Ball, Ghost in the Shell, Pokémon, Vampire Hunter D, Neon Genesis Evangelion, and all the films from Studio Ghibli and Miyazaki.

"We are already planning 'The Art of Anime and Everything Cool II!'".

Outside of Japan and in English, "anime" is colloquial for Japanese animation and refers specifically to animation produced in Japan. This cornerstone of the inaugural auction was the famed Glad Anime Museum Collection, created by Mike Glad, the photographer and Oscar-nominated film producer who amassed original art by some of anime's greatest creators.

A perfect cel setup with key master background from My Neighbor Totoro (1988), depicting characters Mei and Satsuki drew 69 bids before it went for $84,000 – nearly 17 times its pre-auction estimate. The hand-painted original production cel setup can be seen at the 48:13 mark of the beloved Studio Ghibli classic. This stunning piece is rendered masterfully and attributed to the acclaimed art director Kazuo Oga, who was challenged by director Hayao Miyazaki to raise his standards for the film.

Also racing far beyond its pre-auction expectations was a production cel setup from AKIRA, featuring a pulse-pounding scene featuring the character Kaneda (Tokyo Movie Shinsha, 1988), which brought a winning bid of $78,000 against a pre-auction estimate of $5,000. This extremely rare key master setup from the sequence depicting Kaneda on his iconic red motorcycle, can be seen at the 1:52:48 mark of the film and on page 25 of the German Film Institute's gallery exhibition book Ga-Netchu! The Manga Anime Syndrome. Attributed to art director Toshiharu Mizutani, these vivid and rich futuristic urban backgrounds are a defining feature of the film, and complete Key Master setups like this one are extraordinarily rare. 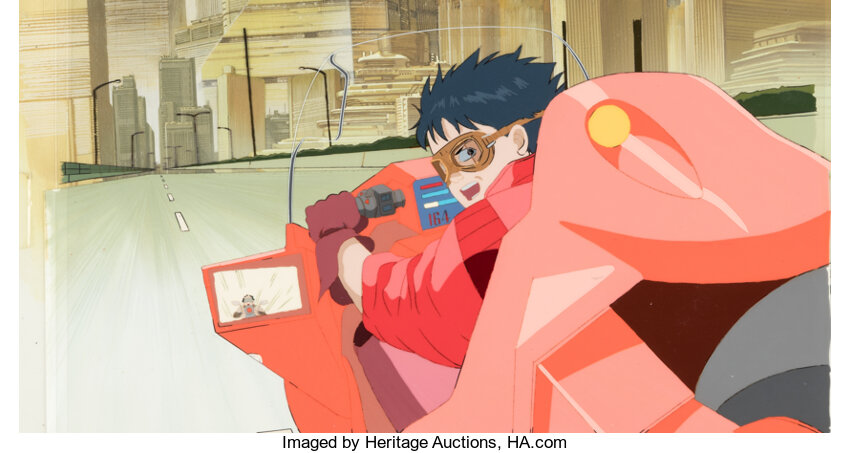 My Neighbor Totoro Mei, Satsuki and Catbus Production Cel Key Master Setup (Studio Ghibli, 1988) prompted 45 bids before it reached $72,000 – nearly 29 times its pre-auction estimate! This cel captures the unforgettable moment from the climactic scenes of the film, in which Satsuki finds her missing sister, Mei, with the help of the Catbus from Hayao Miyazaki's My Neighbor Totoro.

An AKIRA Kaneda Production Cel Setup with Master Background (Tokyo Movie Shinsha, 1988) drew a winning bid of $63,000 against an estimate of $5,000. The cels are presented on a detailed Master background showcasing an elaborate and futuristic cyberpunk urban sprawl prevalent throughout the film. The background is rendered in gouache on two layers, and the vivid and atmospheric settings and backgrounds of the film are attributed to Toshiharu Mizutani.

Other anime highlights include:

The "Everything Cool" section also had record breaking prices from TRON, Peanuts comic strip original art and animated superheroes, The Simpson's and so many more. In fact, the entire sale's top lot was a Charles Schulz Peanuts Daily Comic Strip Original Art dated 10/9/51 (United Feature Syndicate, 1951). The strip more than doubled its pre-auction estimate when it sold for $102,000. The installment features the early versions of the characters, evidenced by Charlie Brown's smaller feet and massive head, as well as Snoopy's smaller, more puppy-like appearance. Early Peanuts artwork is coveted by collectors, and this strip came a year and a week after the Oct. 2, 1950 Peanuts premiere.

The 1994 trading card original art by movie poster master artists Greg and Tim Hildebrandt of fan-favorite character Wolverine, created for the popular Marvel Masterpieces card series, sold for an astonishing $26,400, against a $6,000 estimate.

Making its auction debut, original concept art by Peter Lloyd for the feature film TRON (Walt Disney, 1982) ended at $20,400, against a $5,000 estimate. Lloyd worked on creating and refining digital effects for the 1982 film and this rare artwork is from the personal collection of TRON producer Donald Kushner.

The coolness factor went off the charts when a surfboard featuring original art from the hand of Lilo & Stitch director Chris Sanders sold for $15,600. Never before seen at auction, the 6-foot tri-fin Rocket Fish surfboard depicts a more mature Lilo, beautifully rendered with amazing brush strokes and gorgeous soft tones.

Other "Everything Cool" highlights include the 1994 original art by the Hildebrandt brothers for Marvel Masterpieces Holofoil Trading Card #8 Spider-Man (Fleer, 1994), which sold for $19,200, and a set of two original animation drawings of Gertie the Dinosaur by Winsor McCay (Winsor McCay, 1914), which brought $12,000.

Heritage Auctions' next animation auction is Aug. 6-8 with more than 1,600 lots of offer, featuring "The Art of Walt Disney's Sleeping Beauty and Eyvind Earle," the largest collection of production art from this iconic 1959 animated feature film ever brought to market.