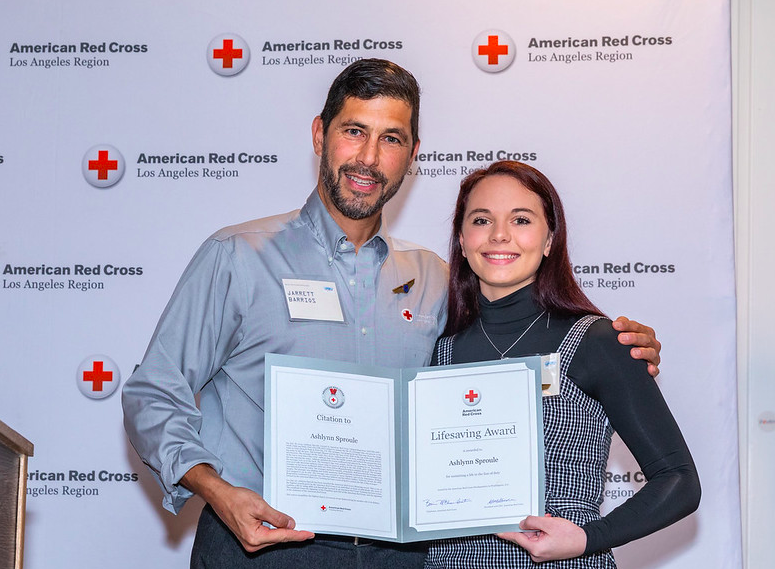 The American Red Cross Los Angeles Region honored 12 local volunteers at the annual Volunteer Excellence Awards Saturday afternoon for their excellent service. The honorees plus all the thousands of volunteers in the LA Region were thanked at the event for their dedication during a year in which the organization called on volunteers to respond to back-to-back wildfires and the largest earthquake in years, among other disasters.

The Volunteer Excellence Awards were at the Proud Bird and were attended by 350 of the region's 6,720 Red Cross volunteers, who, after an intense year of responding to wildfires and other tragedies, were able to unwind and mingle with their fellow humanitarians.

In addition to the volunteers who were peer nominated and chosen for their service work during 2019, two volunteers received the prestigious National Lifesaving Award.

The Certificate of Merit Award, which is signed by the President of the United States, was given to Paul Stephan for his heroic and lifesaving actions when a fellow airplane passenger experienced a cardiac emergency. The Certificate of Merit is the highest award given by the Red Cross to individuals who save or sustain a life using skills learned in a Red Cross Training Services course.

The Red Cross Lifesaving Award for Professional Responders was given to Ashlynn Sproule, a fourth-generation Red Cross volunteer and trained lifeguard, who helped save the life of a teenager who passed out in a swimming pool following a ski jumping exercise. Sproule was given the Red Cross' highest award presented to individuals or group of individuals who save or sustain a life using skills learned in a Red Cross Training Services course.

The other awardees include:

Carmela Burke – International Services Award
A long-time volunteer, Burke stepped into a new role with International Services this year. Her dedication for educating the community, as well as providing resources, matches her desire for collaboration and success for the Red Cross. She engages with several departments and her commitment and enthusiasm is now shared with her new cohort of youth advocates.

James and Nancy Piedlow – Biomedical Achievement Award
This volunteer duo has worked side by side weekly for more than 10 years with the Red Cross in Biomedical Services (blood donation services). They are committed to the volunteer experience and the satisfaction of the customers. These volunteers wear many hats in their volunteer role and exceed any task they are asked to do.

William Keith – Disaster Preparedness & Response Volunteer Award
Keith has been active and exceedingly committed to the Disaster Action Team program, its clients and volunteers, even while working full-time. He uses his connections in the community to promote the program and its resources to ensure success.

John Shisko – Service to the Armed Forces (SAF) Award
Shisko works tirelessly and collaboratively with our veterans and our SAF volunteers to ensure their support and success. Through his weekly, and almost daily, presence, he demonstrates the Red Cross mission. Though he manages a difficult program, he retains committed volunteers and improves the relationship with our veteran organizations by being involved and supportive.

Timothy Hokanson – Health & Safety Services Award
For more than 7 years, Hokanson has dedicated time to the Red Cross, earning more than 1,300 hours in 2019. Through his sincerity and kindness, he leaves a positive impact on all who work with him. Even in the toughest of situations, Hokanson leads with compassion. Hokanson is always available and responsive and works hard to close all loops.

Katelyn Jaramillo – Outstanding Youth Services Volunteer Award
This youth volunteer started as a freshman and has taken on several leadership positions across departments. After turning 18, Jaramillo continued her work becoming an active adult member of the Disaster Services team, continuing to educate and train her community. She is not afraid to ask questions and work to improve what she sees around her.

Philip Barker – Clara Barton Honor Award for Meritorious Volunteer Leadership
Barker has contributed more than 10 years of service to the Red Cross in roles with the Disaster Action Team, at Sound the Alarm events, with Fleet & Facilities and with Youth Services, serving more than 2,500 hours in 2019 alone. He is dedicated to his Greater Long Beach, Rio Hondo and South Bay Chapter. He makes himself available, day or night, and will assist in any task, particularly for clients in need. He consistently handles multiple, high level projects all while answering emails or phones calls.

Henry Mills – Special Citation for Exceptional Volunteer Service
With 8 years under his belt, Mills has excelled in Disaster Services, assisting when and where he can. He is dependable and will always complete his given tasks without delay and a smile on his face, even with the long days, back-to-back weekends and continuous disaster relief operations. His volunteer teams speak highly of him and thank him for his positive attitude and commitment to the job.

Katharine Carpenter – Volunteer Leadership Award
In just 6 short years, Carpenter has become a vital volunteer leader in several departments. She passionately takes on challenging projects that ensures the diversity and inclusion of all communities, as well as increasing our volunteer base. She identifies new ways she can help and follow through. In 2019 alone she served more than 1,250 hours. Her ability to hold as many leadership positions and still deeply and positively impacting each group is astounding.