Stand Up To Cancer (SU2C) has revealed the formation of a "Dream Team" of top researchers to take on one of the toughest challenges in cancer research and treatment: colorectal cancer, which is expected to claim the lives of more than 50,000 Americans this year. 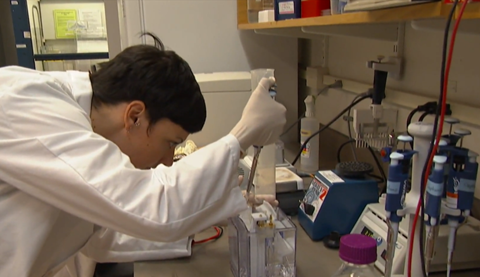 The announcement was made at a special event during the 2017 Annual Meeting of the American Association for Cancer Research (AACR), SU2C's Scientific Partner.

"We are urgently in need of new approaches to colorectal cancer," said Phillip A. Sharp, PhD, institute professor at MIT's Koch Institute for Integrative Cancer Research, Nobel Laureate, and chairman of SU2C's Scientific Advisory Committee. "We have made great progress in prevention through widespread screening, but new methods are needed to treat colorectal cancer when it actually occurs."

The SU2C Colorectal Cancer Dream Team, with funding of up to $12 million from SU2C, will be led by Luis A. Diaz, MD, of Memorial Sloan Kettering Cancer Center in New York, as leader, and Charles S. Fuchs, MD, MPH, director of the Yale Cancer Center in New Haven, Connecticut; Lewis Cantley, PhD, director of the Meyer Cancer Center at Weill Cornell Medicine and NewYork-Presbyterian Hospital in New York; and Zhenghe Wang, PhD, of the School of Medicine at Case Western Reserve University in Cleveland, as co-leaders.  More than 50 researchers at six institutions are involved in the team.

"I know first-hand how devastating a colon cancer diagnosis can be," said Katie Couric, the journalist who is a co-founder of SU2C and whose first husband, Jay Monahan, died of colorectal cancer in 1998, after a nine-month battle with the disease. "After Jay was diagnosed, I was shocked to learn that the first-line treatment for those with advanced disease hadn't changed much since the 1950s.  Today there are more therapeutic options, but colorectal cancer is still the second-leading cancer killer of men and women combined in this country. I am enormously pleased and proud that SU2C is bringing a team of talented scientists who will be empowered to do all they can to fight this insidious killer."

"Though a combination of new avenues in immunotherapy, targeted therapeutics, metabolomics, and precision prevention, we believe we can find new ways to fight colorectal cancer and bring new hope to patients," Diaz said.

The team's research program will also include clinical trials to investigate drugs that could attack genetic vulnerabilities in many types of colorectal cancer tumors.

"The metabolism of cancer cells, how they process nutrients, is different from normal cells," Cantley said. "The trials are designed to take advantage of that knowledge and hopefully kill the cells."