The NFL will honor outstanding members of the community throughout the three-day celebration at the 2017 NFL Draft. 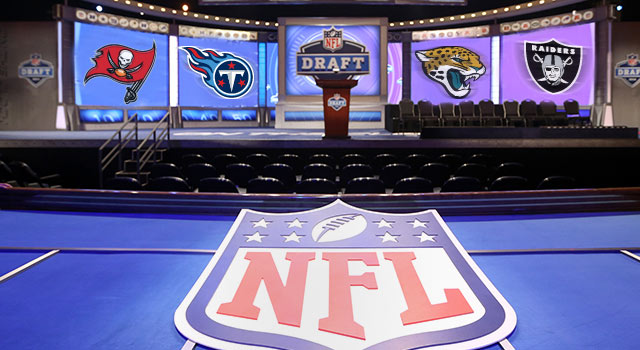 Special guests will take part in the Draft by announcing various picks and participating in festivities in Philadelphia.

The NFL will recognize active duty service members, veterans and their families at Draft events throughout the week. On Thursday evening, a joint color guard will be joined onstage with veterans from Wounded Warrior Project during the National Anthem to open the Draft.

The NFL has teamed with the Tragedy Assistance Program for Survivors (TAPS) to honor the Frisons, a Gold Star Family. A Lancaster, Pa. native and passionate Philadelphia Eagles fan, U.S. Army 1st Lt. DEMETRIUS FRISON lost his life in combat in Afghanistan in 2011. Frison's wife and son will accompany Philadelphia Eagles Legend RON JAWORSKI onstage to announce the Eagles' Round 2 pick along with a Joint Service Honor Guard representing all branches of military service.

In addition, active duty service members from all five branches of the military and veterans from the USO and Wounded Warrior Project will be guests at the Draft on Saturday for Rounds 4-7.

St. Jude patient KATE FOSTER will join COMMISSIONER GOODELL and Chicago Bears Legend JAY HILGENBERG to announce the Bears' Round 2 pick. A competitive gymnast, Kate, 18, from Rockford, IL, lost her left leg to an infection during treatment for Acute Myeloid Leukemia at age 12 but overcame her illness and returned to the gym less than a year later.

Make-A-Wish recipient TJ ONWUANIBE will have his wish granted when he joins COMMISSIONER GOODELL to announce the Baltimore Ravens' Round 1 pick. A football-loving 14-year old, TJ is a cancer survivor and devoted Ravens fan from Laurel, MD.

Football players from MARTIN LUTHER KING HIGH SCHOOL will take the stage alongside COMMISSIONER GOODELL and represent the Philadelphia Eagles during their Round 1 pick. Due to lack of resources and funding, Germantown High School's football program merged with former crosstown rival Martin Luther King High School. Prior to the pick announcement, the team will walk the Red Carpet alongside Draft prospects.

In addition, LIAM MCCLURE, a Methacton High School football player diagnosed with autism, will walk the Red Carpet on Thursday and hand out New Era Caps to Draft picks with his teammates. McClure fell in love with football after attending a Philadelphia Eagles Training Camp and further developed his passion for the game after joining the Methacton Warriors.

For the first time, Round 6 of the NFL Draft will be youth football-themed. Youth football players from Pop Warner, NFL FLAG and local teams will represent various NFL clubs in their local markets during pick selections.

The NFL Draft 7-on-7 tournament champions will be recognized onstage during the Philadelphia Eagles' Round 7 selection.

Thirty-two former players from the NFL Legends Community, one representing each team, will be featured in Round 2. 15 Pro Football Hall of Fame members will announce picks, including MORTEN ANDERSEN, JIM BROWN, WILLIE BROWN, FRANCO HARRIS, JIM TAYLOR and THURMAN THOMAS.

The Walter Payton NFL Man of the Year Award recognizes a player for his excellence on and off the field and represents the best of the NFL's commitment to philanthropy and community impact.

Below is the list of former players scheduled to make selections in Round 2, as well as Walter Payton NFL Man of the Year national and team winners announcing Round 3 picks.