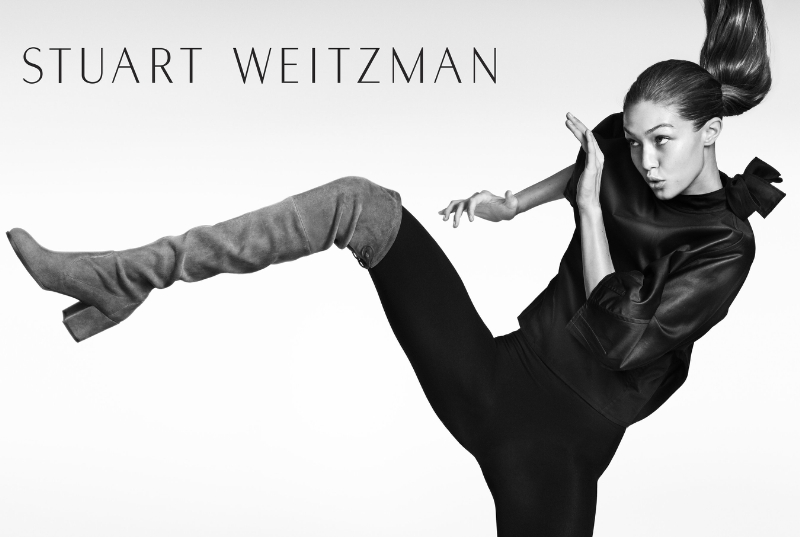 When we say that Gigi Hadid is everywhere... we mean it. From fashion to makeup campaigns, Hadid is a wanted star.

Now she is being featured in Stuart Weitzman's Fall 2016 campaign.

Shot by renowned fashion photographer Mario Testino for the 10th season, the black-and-white ads continue to embrace a distinctively minimalist aesthetic – this time with the dynamic addition of movement and a decidedly editorial approach.

Inspired by Gigi's real-life workout regimen, the campaign captures her power, agility and gracefulness with vigorous energy. From boxing to jumping to athletic-inspired moves, the beauty of a strong, confident and independent woman unfolds with each kick and punch.

In the world of Stuart Weitzman, "sexy" means being comfortable and confident in your own skin, and the campaign captures this essence in an effortlessly chic way while clearly showcasing the new season's essential silhouettes. The international advertising campaign will launch in the United States, Italy, France, England, Dubai, Germany, Spain and Asia.

Outdoor advertising (billboards and kiosks) will run in Los Angeles, New York, Milan, Paris and Hong Kong. A behind-the-scenes video and additional creative content will be featured on www.stuartweitzman.com and in Stuart Weitzman boutiques worldwide.