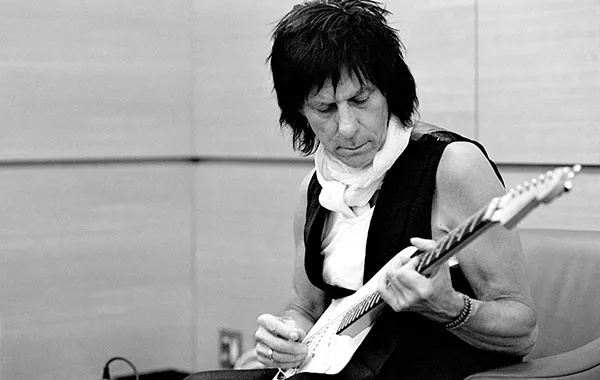 Jeff Beck, the celebrated guitarist who played with the Yardbirds and led the Jeff Beck Group, has died aged 78, his representative has confirmed. Beck died on Tuesday after “suddenly contracting bacterial meningitis”, the representative confirmed. “His family asks for privacy while they process this tremendous loss,” they added.

Often described as one of the greatest guitarists of all time, Beck – whose fingers and thumbs were famously insured for £7m – was known as a keen innovator. He pioneered jazz-rock, experimented with fuzz and distortion effects and paved the way for heavier sub-genres such as psych rock and heavy metal over the course of his career. He was an eight-time Grammy winner, recipient of the Ivor Novello for outstanding contribution to British music and was inducted into the Rock and Roll Hall of Fame both as a solo artist and as a member of the Yardbirds.

Musicians and longtime friends began paying tribute minutes after the news broke. On Twitter, Jimmy Page wrote, “The six stringed Warrior is no longer here for us to admire the spell he could weave around our mortal emotions. Jeff could channel music from the ethereal. His technique unique. His imaginations apparently limitless. Jeff I will miss you along with your millions of fans.”

“With the death of Jeff Beck we have lost a wonderful man and one of the greatest guitar players in the world,” Mick Jagger wrote. “We will all miss him so much.”

Rod Stewart, who toured with the Jeff Beck Group in the late 60s, called him “one of the few guitarists that when playing live would actually listen to me sing and respond … you were the greatest, my man. Thank you for everything.”

“Now Jeff has gone, I feel like one of my band of brothers has left this world, and I’m going to dearly miss him,” Ronnie Wood tweeted.

Ozzy Osbourne tweeted, “I can’t express how saddened I am to hear of Jeff Beck’s passing. What a terrible loss for his family, friends & his many fans. It was such an honour to have known Jeff and an incredible honor to have had him play on my most recent album.”

Beck was born Geoffrey Beck in 1944, in Wallington, south London. As a child, he sang in a church choir, and began playing guitar as a teenager, getting his first instrument after trying to dupe a music store in a hire-purchase scheme. “There was this guy, he wasn’t old enough to be my dad but he offered to be my guarantor. He said, ‘I’ll tell them I’m your stepfather’,” he told the New Statesman in 2016. “Within a month, they’d sussed out he was nothing to do with me whatsoever and they snatched the guitar back. My dad went along and explained that we couldn’t afford it – so they waived the rest of the payments and I got the guitar.”

After briefly attending art school in London, Beck began playing with Screaming Lord Sutch until, after Eric Clapton left the Yardbirds, Jimmy Page recommended Beck as his replacement. Although already successful by that time, the Yardbirds had many of their biggest hits during Beck’s short tenure in the band, including the 1966 album Yardbirds and the No 3 single Shapes of Things. Beck was only in the Yardbirds for 20 months, leaving the group in 1966 due to inter-band tensions that had arisen during a US tour. (Later, he would say that “every day was a hurricane in the Yardbirds”.)

In 1968, Beck released Truth, his debut solo album, which drew on blues and hard rock to form a prototypical version of heavy metal. One year later, he released an album with the Jeff Beck Group, Beck-Ola but had his solo career derailed after he suffered a head injury in a car accident.

In 1970, after recovering from his skull fracture, Beck formed a new incarnation of the Jeff Beck Group, and released two records – 1971’s Rough and Ready and 1972’s Jeff Beck Group – which displayed his earliest forays into the jazz fusion sound he would become known for.

In the mid-70s, Beck supported John McLaughlin’s jazz-rock group Mahavishnu Orchestra on tour, an experience that radically changed how he saw music. “Watching [McLaughlin] and the sax player trading solos, I thought, ‘This is me’,” he said in 2016.

Inspired, Beck embraced jazz fusion fully on the George Martin-produced Blow By Blow. A platinum-selling hit in the US which peaked at No 4, it was Beck’s most commercially successful album ever, but he later expressed regret. “I shouldn’t have done Blow By Blow,” he told Guitar Player in 1990. “I wish I had stayed with earthy rock’n’roll. When you’re surrounded with very musical people like Max Middleton and Clive Chaman, you’re in a prison, and you have to play along with that.”

Despite his later feelings about Blow By Blow, Beck continued to experiment throughout the 70s, releasing another platinum-selling jazz fusion album, Wired, in 1976, and There and Back, in 1980. “He embraced project after project with limitless energy and enthusiasm,” Robert Plant said in a statement. “He cooked up magic through all the passing eras, always up for the next, unknown, unlikely collision.”

Beck’s output slowed dramatically in the 80s, in part due to his suffering from tinnitus. His projects through the decade were sporadic but notable: in 1981, he performed with Clapton, Sting and Phil Collins at Amnesty International’s Secret Policeman’s Other Ball benefit concerts, and returned with his first solo album in five years, Flash, in 1985. Produced by Chic’s Nile Rodgers, it presented a dramatic shift for Beck in that it primarily featured vocal-led pop tracks, a change from his largely instrumental 70s output. People Get Ready, a collaboration with Rod Stewart, became one of Beck’s rare hit singles under his own name, charting in the US, New Zealand, Sweden, Belgium and Switzerland.

The 1989 album Jeff Beck’s Guitar Shop was his last solo album for a decade, but he remained active through the 90s, collaborating with Jon Bon Jovi, Kate Bush and Roger Waters, among others; in 1999, he released Who Else, which incorporated techno and electronic elements.

In the 2000s and 2010s, Beck only released a handful of albums, but began to settle into his role as an elder statesman and lauded influence, performing with artists such as Kelly Clarkson and Joss Stone. He lived on an East Sussex estate since 1976, and married his second wife, Sandra Cash, in 2005.

Beck’s most recent project was last year’s 18, a collaborative album with Johnny Depp that featured original songs penned by Depp and covers of Marvin Gaye, the Velvet Underground and other classic artists. The album was widely panned; in a two-star review, the Guardian’s Michael Hann described it as a “peculiar and hugely uneven record,” while noting that “it’s to Beck’s credit that alone among the guitar heroes of the 1960s UK R&B boom, he has not retreated into coffee-table blues.”

Other musicians to pay tribute to Beck included the Beach Boys’ Brian Wilson, who wrote that he was a “genius guitar player.” Billy Idol described him as “sublime”, and said he was “glad I was alive to hear him play.” Stevie Van Zandt called Beck a “major influence” and “an infinite source of joy my entire lifetime.”

Joe Satriani said that Beck was “a genius, a stunning original.” “He was an astounding guitar player with more ways to make you go, ‘WTF was that?’ than anybody else. He was profoundly talented, and never stopped innovating on the instrument.”

Originally from England, Beck is survived by his wife Sandra, according to his representative.