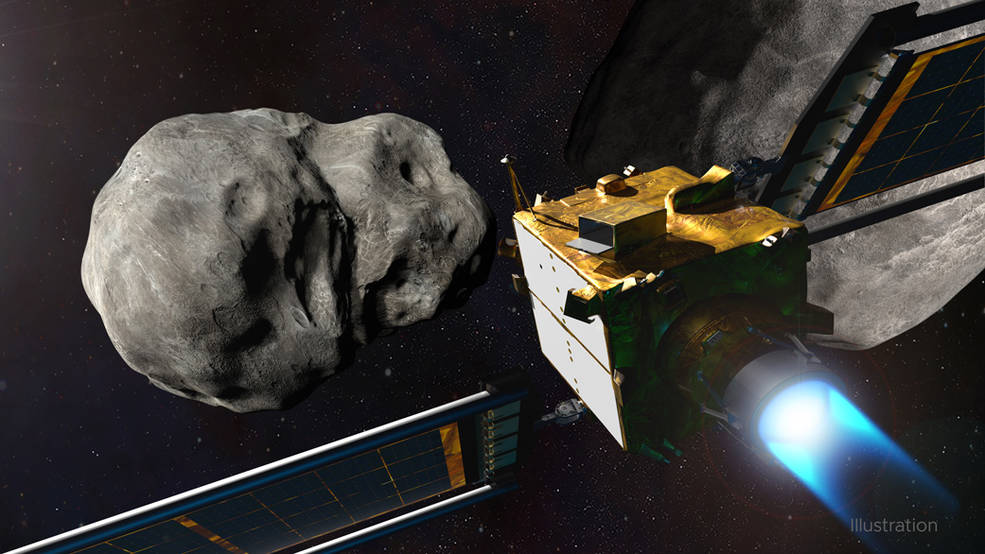 On Monday, Sept. 26, NASA’s Double Asteroid Redirection Test (DART) mission has the challenging goal of crashing its spacecraft into Dimorphos, a small moonlet orbiting a larger asteroid by the name of Didymos. While the asteroid poses no threat to Earth, this mission will test technology that could be used to defend our planet against potential asteroid or comet hazards that may be detected in the future.

Johns Hopkins Applied Physics Laboratory (APL) in Laurel, Maryland, designed and leads the ambitious mission for NASA. But as with many missions, the endeavor calls on expertise from various NASA centers. In the case of the agency’s Jet Propulsion Laboratory in Southern California, that expertise is for navigation, precise location of the target, asteroid science, and Earth-to-spacecraft communications.

“Strategic partnerships like ours with APL are the lifeblood of cutting-edge space mission development,” said Laurie Leshin, director of JPL. “Our history of working with APL goes all the way back to Voyager and extends well into the future, with missions like Europa Clipper. The work we do together makes us all – and our missions – better. We’re proud to support the DART mission and team.”

Launched in November 2021, the approximately 1,320-pound (about 600-kilogram) DART spacecraft will be at a point 6.8 million miles (11 million kilometers) from Earth when it impacts Dimorphos, which is just 525 feet (160 meters) across. Making matters more challenging still, the spacecraft will be closing in on the space rock at about 4 miles (6.1 kilometers) per second. Dimorphos orbits Didymos, which is roughly half a mile (780 meters) in diameter, every 11.9 hours.

JPL’s navigation section is experienced at getting spacecraft to faraway locations accurately (think: Cassini to Saturn, Juno to Jupiter, Perseverance to Mars). Each mission brings its own set of challenges, and DART has many.

“It’s a difficult job,” said JPL’s Julie Bellerose, who leads the DART spacecraft navigation team. “A big part of what the navigation team is working on is getting DART to a 9-mile-wide (15-kilometer-wide) box in space 24 hours before impact.” At that point, Bellerose said, the mission’s final trajectory correction maneuver (the firing of thrusters to modify the direction of flight) will be executed by mission controllers back on Earth. From then on, it’s up to DART.

During the final hours of its one-way journey, DART will utilize an autonomous onboard navigator created by APL to stay on course. SMART Nav, or Small-body Maneuvering Autonomous Real Time Navigation, collects and processes images of Didymos and Dimorphos from DART’s DRACO (Didymos Reconnaissance and Asteroid Camera for Optical navigation) high-resolution camera, and then uses a set of computational algorithms to determine what maneuvering needs to be done in the final four hours before impact.

Along with the DART team, another set of JPL navigators is calculating and planning the trajectory of DART’s spacecraft companion: The Italian Space Agency’s (ASI) Light Italian CubeSat for Imaging Asteroids, or LICIACube, which has the important task of imaging DART’s impact effects on Dimorphos. The toaster-size spacecraft disconnected from DART on Sept. 11 to navigate interplanetary space on its own – with an assist from the team at JPL.

“We are working with ASI to get LICIACube to within 25 to 50 miles (40 to 80 kilometers) of Dimorphos just two to three minutes after DART’s impact – close enough to get good images of the impact and ejecta plume, but not so close LICIACube could be hit by ejecta,” said JPL’s LICIACube navigation lead Dan Lubey.

While not necessary for the DART mission to succeed, the pre- and post-impact images this small satellite’s two optical cameras LEIA (LICIACube Explorer Imaging for Asteroid) and LUKE (LICIACube Unit Key Explorer) will provide could benefit the scientific community for studies of near-Earth objects and aid in the interpretation of the DART results.

JPL’s Center for Near Earth Object Studies (CNEOS), an element of NASA’s Planetary Defense Coordination Office (PDCO), was tasked with determining not only the location of Didymos in space to within 16 miles (25 kilometers), but also when Dimorphos would be visible – and accessible – from DART’s direction of approach.

Along with investigators at other institutions, members of CNEOS will study the plume of rock and regolith (broken rock and dust) ejected by the impact, as well as the newly formed impact crater and the movement of Dimorphos in its orbit around its parent asteroid. Led by JPL’s Steve Chesley, they will not only examine data and imagery from DART and LICIACube, but also data from space and ground-based telescopes.

Scientists think the impact should shorten the moonlet’s orbital period around the larger asteroid by several minutes. That duration should be long enough for the effects to be observed and measured by telescopes on Earth. It should also be enough for this test to demonstrate whether kinetic impact technology – impacting an asteroid to adjust its speed and therefore its path – could in fact protect Earth from an asteroid strike.

Important contributors among those Earth-based telescopes include NASA’s Deep Space Network, the array of giant radio telescope dishes that JPL manages. With radar observations led by JPL scientist Shantanu Naidu, the massive 70-meter (230-foot) dish of Deep Space Station 14 at the network’s Goldstone complex near Barstow, California, will begin observing the aftermath of the celestial collision about 11 hours after impact, when Earth’s rotation brings Didymos and Dimorphos into view of Goldstone. Data from the echoes bounced off the two space rocks should help determine what changes occurred in the moonlet’s orbit and may even provide some coarse-resolution radar images.

Of course, radio science is only part of the Deep Space Network’s role. The navigation teams depend on it as well because the network is the means by which NASA has been communicating with spacecraft at the Moon and beyond since 1963.