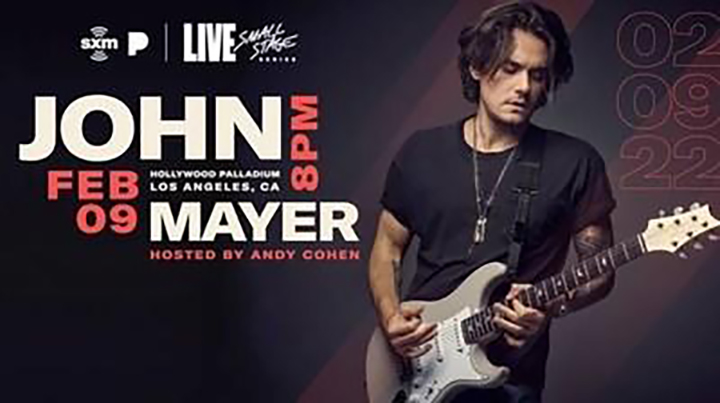 SiriusXM and Pandora announced today that they are kicking off football's biggest weekend with GRAMMY® Award-winning artist John Mayer performing live at Hollywood Palladium in Los Angeles on Wednesday, February 9. SiriusXM subscribers and Pandora listeners can RSVP for the free event HERE.  The special concert, hosted by Andy Cohen, will feature John Mayer performing songs from his latest album Sob Rock including his hit single "Last Train Home," as well as career-spanning fan favorites. Ahead of the concert, Andy Cohen will sit down with John Mayer for an exclusive interview to discuss his music, upcoming tour, and more.

Fans at the Small Stage Series show will receive complimentary t-shirts designed by John Mayer (while supplies last) and stadium-regulated clear tote bags for use during the big game weekend. Attendees will also be treated to live pre-show entertainment and will be invited to strike a pose in various photo moments situated within the venue.  "I'm excited for people to enter the Sob Rock Universe through SiriusXM and Pandora's Small Stage Series. This will be my first time playing many of these songs in front of a live audience and it's something I've been looking forward to for a very long time," said John Mayer.

"We are thrilled to announce John as the latest artist to join our exclusive and successful Small Stage Series which began last fall," said Scott Greenstein, SiriusXM President and Chief Content Officer. "With his incredible artistry and love of performing live, John will help us kick off the big game weekend with this special one-night show in Los Angeles. This is the latest chapter in our live performance series where our listeners can be part of unique live performances and one-of-a-kind experiences."

Pandora listeners can tune into John Mayer's performance February 12 at 9:00 pm ET / 6:00 pm PT and in addition to the performance, Mayer will conduct an in-depth Q&A with Andy Cohen. Fans can RSVP for this free virtual Pandora LIVE event HERE.

During the Pandora LIVE event, viewers will be invited to test their knowledge of John Mayer with pre-show trivia and chat live with other fans nationwide. Additionally, a limited amount of complimentary John Mayer merchandise will be available for participants on a first-come, first-served redemption code basis and some of John Mayer's top listeners on Pandora will have the opportunity to participate in a virtual meet and greet with special moments to be showcased during the event. In the coming weeks, Pandora will be launching Pandora LIVE: Backstage with John Mayer, a new station for fans to hear behind-the-scenes stories from John Mayer and a mix of songs that inspire him. After the virtual event, the station will be updated to include live performance tracks and commentary from the show.

To maintain the highest public health standards and/or requirements, SiriusXM and Pandora will adhere to health and safety protocols for the venue, and all state and local health mandates to protect attendees, staff, and artists. There's nobody quite like John Mayer. He has emerged as a GRAMMY® Award-winning artist, celebrated songwriter, and iconic guitar player all at once. The Bridgeport, CT native introduced himself on the quintuple-platinum Room For Squares in 2001 and has earned three #1 debuts on the Billboard Top 200 with the triple-platinum Heavier Things [2003], double-platinum Battle Studies [2009], and gold Born and Raised [2012]. In addition to selling over 20 million albums worldwide and gathering billions of streams to date, he has garnered seven GRAMMY® Awards, including "Song of the Year'' for "Daughters," and has earned a record seven U.S. No. 1s on Billboard's Top Rock Albums chart and 25 entries on the Hot Rock Songs chart, the most for any solo artist. Most recently, 2021's Sob Rock, produced by John Mayer and Don Was, debuted at No. 1 on the Billboard Top Album Sales chart, and was also the No. 1 Rock Album, Vinyl Album, and Digital Album in the U.S. the week of release. In 2015, Dead & Company was founded, with Mayer on lead guitar as well as vocals. Since its formation, the band has completed ten tours, playing to nearly four million fans, and has become a record-breaking stadium act. Catch John Mayer on his "Sob Rock" 2022 tour. For more information, visit Johnmayer.com.