Tune In: The Great Food Truck Race Heads To Alaska 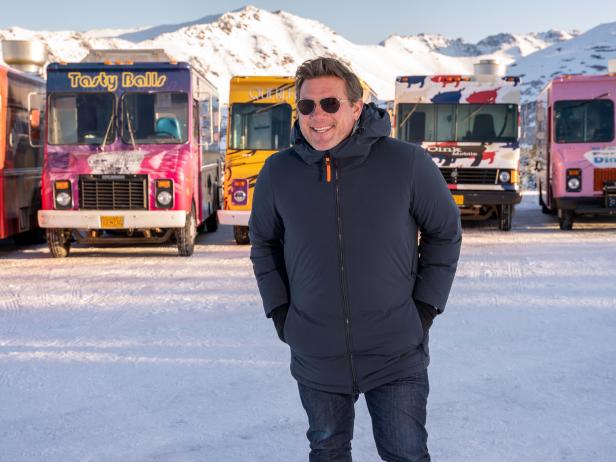 The Great Food Truck Race heads north to Alaska for the wildest culinary journey in series history this March, where fighting blistering cold, raging winds and short daylight hours are part of every week’s action.

Hosted by Tyler Florence and shot on-location in Alaska, the six-episode season begins with seven teams of aspiring food truck owners greeted with their own truck – but first, they must break the keys out of 200-pound blocks of ice. These teams are not just battling each other, they are battling the elements of this beautiful but treacherous region to avoid elimination and reach the end of the road’s $50,000 grand prize. Each week, the caravan of competitors hits a different location for high-stakes challenges that test their cooking chops, business skills and ability to face harsh weather conditions from blizzards to icy mountain roads. The Great Food Truck Race: Alaska premieres on Sunday. March 7th at 10pm ET/PT on Food Network and streams the same day on discovery+.

“Alaska is the most magnificent and most challenging location yet for The Great Food Truck Race,” said Courtney White, President, Food Network. “Cooking talent and selling strategies are not enough to make it, this time teams also have to battle the raw Alaskan elements in each and every challenge.”

In the premiere episode, Tyler welcomes seven aspiring food truck teams to Flattop Mountain overlooking Anchorage to the biggest, boldest road trip ever. In order to get the keys to their trucks, the contestants must break the keys out of 200-pound blocks of ice and that’s just the beginning of their culinary adventure. The teams compete to see who can prep and sell the most food, with the least successful truck heading home. The route then hits Palmer, home to some of the largest vegetables in the world; deep sea fishing in Homer; panning for gold and Alaskan crab challenge in Seward and a scavenger hunt in the arctic remote village of Talkeetna. In the season finale on Sunday, April 11th at 10pm ET/PT the two remaining teams go head-to-head in Fairbanks and the last team standing is awarded the $50,000 grand prize.

Fans can meet the competing teams and browse photo highlights of the competition at FoodNetwork.com/FoodTrucks and share on social who they think should take home the grand prize using the hashtag #GreatFoodTruckRace.

The Great Food Truck Race: Alaska is produced by Critical Content for Food Network and discovery+.