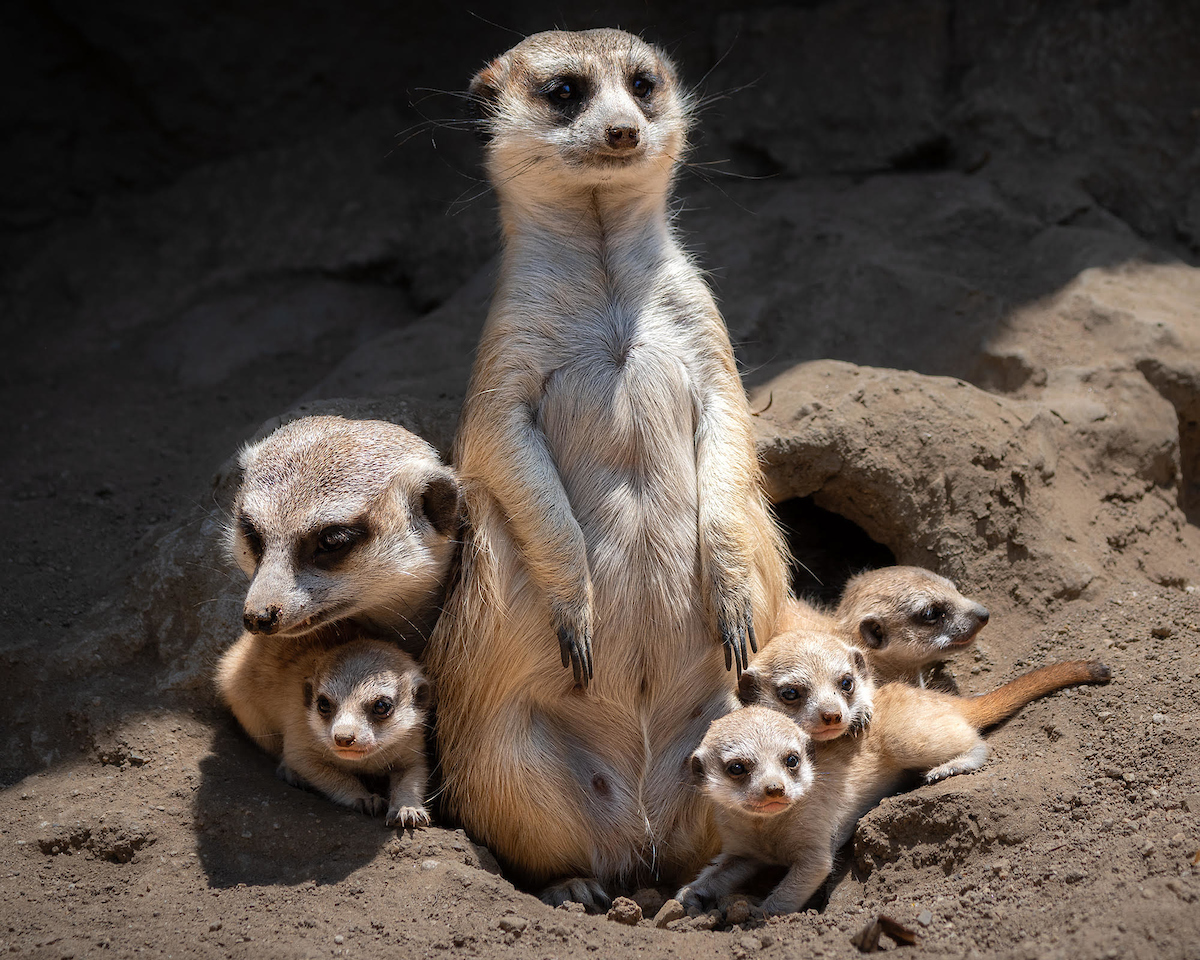 The Los Angeles Zoo announced the birth of four energetic meerkat pups, born on May 30, bringing the group's total to eight meerkats in their mob. Conceived during the Zoo's closure, the currently unsexed pups spent the first two weeks of their lives tucked safely inside an underground burrow with their mother while they nursed. According to animal care staff, the pups have recently emerged from below and are starting to explore their habitat and soak in the warm sun. The adult meerkats in this mob arrived at the L.A. Zoo in 2018 based on a recommendation from the Association of Zoos and Aquariums' (AZA) Species Survival Plan (SSP) program.

"It's been fascinating to watch this mob of meerkats bond and create their social structure since their arrival a few years ago," said Rose Legato, senior animal keeper at the Los Angeles Zoo. "Meerkat mobs can be fierce, so to see how this group has successfully come together to raise these new pups has been really exciting. We look forward to the public returning to the Zoo, so they can see these little pups in person as they explore and dig around in their habitat."

These pint-sized members of the mongoose family have long since been a favorite for Zoo guests, perhaps because of their expressive personalities and constant digging and sunbathing around their habitat. But, what many people may not realize is that meerkats are very aware of their surroundings and are great communicators within their group. Since meerkats are prey to predators from both land and air, the mob is constantly working together to keep a lookout for animals such as eagles, hawks, and jackals. The group designs an intricate system of burrows, which they dig with their own long, sharp claws to keep them safe from predators, while also offering safety from the elements. The mob assigns a sentry, or a guard, to watch over the community and alert others of potential threats through a bark or high-pitched squeal. 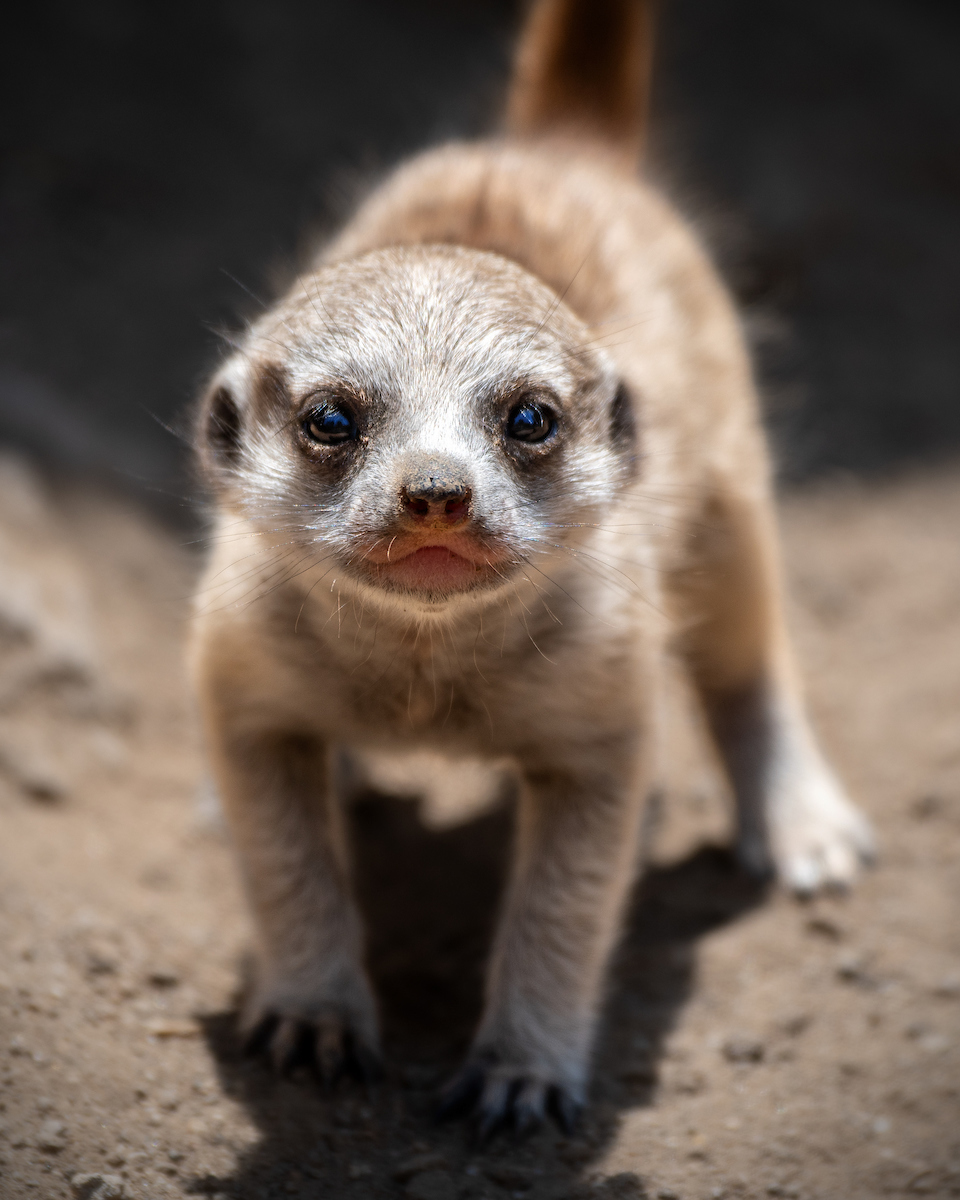 The gestation period for meerkats is 11 weeks, and they typically have two to five pups per litter. After three weeks, the young will first leave the burrows; they are weaned at six to nine weeks. By two months of age, the young meerkats look like adults. Meerkats have a tannish, gray fur with black stripes across the back. The meerkat's body has adapted for a life of digging with small black ears that can be folded back to keep dirt out and long, non-retractable claws used to create tunnels and holes. They also have adaptations that protect them from harsh desert weather such as dark-skinned bellies with light fur, which acts as a solar panel to warm them as they sunbathe, and dark circles around their eyes to help to reduce the sun's glare.

Meerkats are native to the deserts and grasslands of the southern tip of Africa, and they do well in temperate environments such as Los Angeles where they have plenty of sunshine but not extreme temperatures in either direction. The mob at the L.A. Zoo can be seen eating a diet consisting of produce, mice, crickets, mealworms, hard boiled egg, and nutritious insectivore pellets.

While the Los Angeles Zoo is closed to the public until further notice, the Zoo hopes to reopen in July, and guests will be able to see the meerkat mob and their pups on exhibit. For more information on the Zoo's reopening, please follow the L.A. Zoo on social media @lazoo and online at www.lazoo.org/covid-19.