In what feels like his two hundredth starring vehicle of this year alone, Dwayne Johnson lends his action star bonafides to the role of a primatologist who, after a genetic experiment goes awry, must stop his colossal gorilla best friend from causing global destruction in “Rampage,” the latest laughable example of a video game property needlessly turned into an action bonanza.

Featuring a bunch of actors like Naomie Harris and Jake Lacy who should damn well know better, and enthusiastically if egregiously directed by “San Andreas” helmer Brad Peyton, this sci-fi monster mash features a few thrilling action sequences and stabs at humor that at least makes you forget about all the surrounding terribleness. But as a whole, this is a lazily plotted and tonally uneven endeavor that is overly reliant on CGI assisted action sequences to make up for the silly narrative at hand. Featuring a clunky and unoriginal screenplay that consists of a bunch of recycled plot points cobbled together, sloppy and at times criminally negligent direction, and acting that could be generously described as serviceable, “Rampage” is excessive at every turn, proving definitively that bigger doesn’t always equal better.

In the film, Johnson plays Davis Okoye, a primatologist at the San Diego Wildfire Sanctuary and former Special Forces guy who also led an anti-poaching unit for the United Nations in his heyday. During this latter mission, Okoye saved George, a rare albino silverback gorilla that now lives at the sanctuary and counts Davis as his bestie. Davis and George’s fun-filled friendship is upended when a dangerous pathogen that causes alarming growth and violent behavior is released in George’s enclosure, resulting in the gorilla doubling in size, attacking a grizzly bear, and escaping the sanctuary. 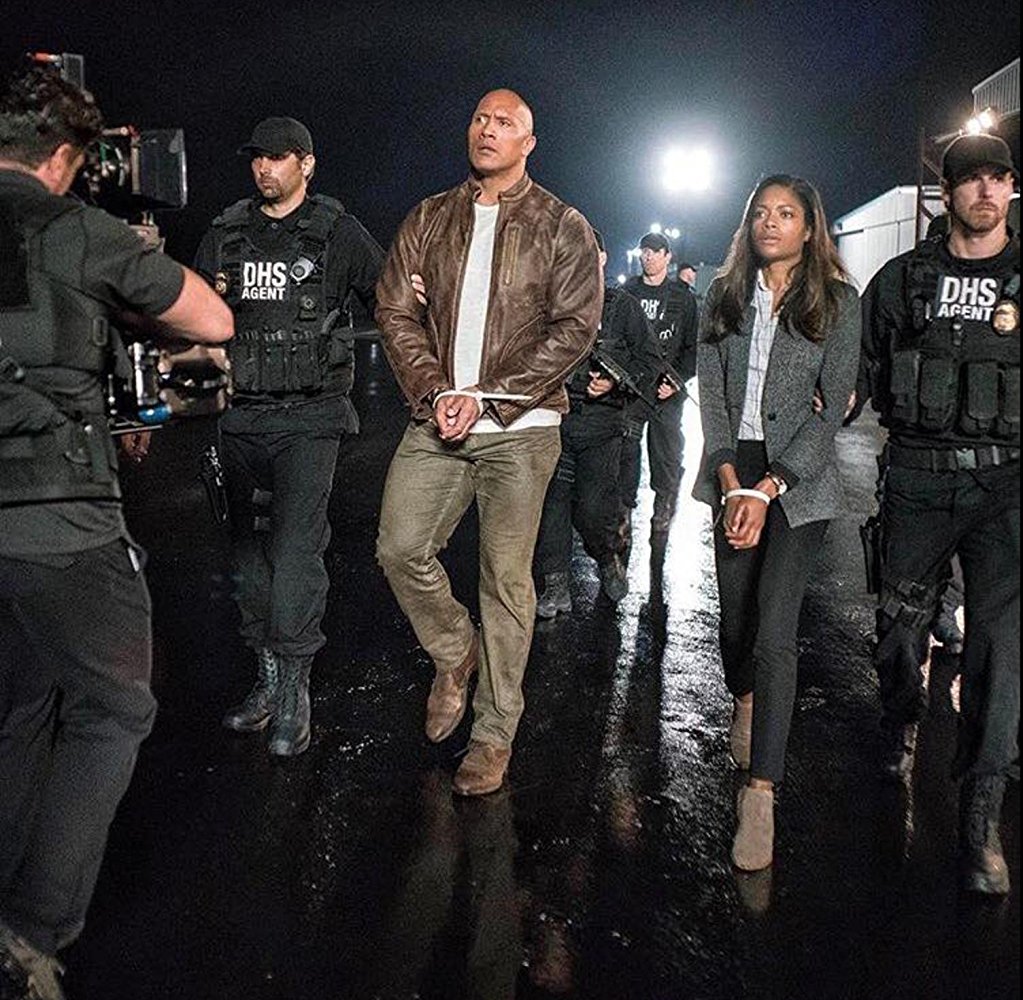 As it turns out, the pathogen came from a genetic experiment gone horribly awry, an experiment called Project Rampage carried out by the evil CEO of Wyden Technologies (Malin Åkerman) and her dimwitted brother (Jake Lacy). In addition to George, the pathogen also contaminated a wolf and an alligator. Now, with some scientific assistance, these three gargantuan creatures are being led by the evil Wyden siblings straight into the heart of downtown Chicago. With the help of a genetic engineer (Naomie Harris) who originally designed the pathogen, and a shadowy figure (Jeffrey Dean Morgan) from an unnamed government agency, Okoye risks life and limb to obtain the antidote in time to avert global catastrophe.

It’s hard to knock a video game adaptation for not being an intelligent piece of filmmaking, but one can at least hope for a campy take on the property, so as to make the mindless entertainment a little more palatable, but only occasionally is the nonsensical action of “Rampage” played for laughs, and even those are of the broadest variety. Aside from a halfhearted semi-romantic subplot with Johnson’s Davis and Naomie Harris’ genetic engineer, and a downright dumb alliance with Jeffrey Dean Morgan’s government agent, the core relationship of the film is between Johnson and George, which is touching in a superficial kind of way but never reaches the kind of genuine emotion achieved in something like the “Planet of the Apes” reboot franchise. Still, despite the overreliance, “Rampage” doesn’t disappoint with its special effects-heavy action sequences, the most memorable of which include George’s escape from the sanctuary, a rampage against government agents on a military plane, and the climactic sequence featuring George, a gigantic wolf named Ralph, and an even bigger alligator terrorizing downtown Chicago. 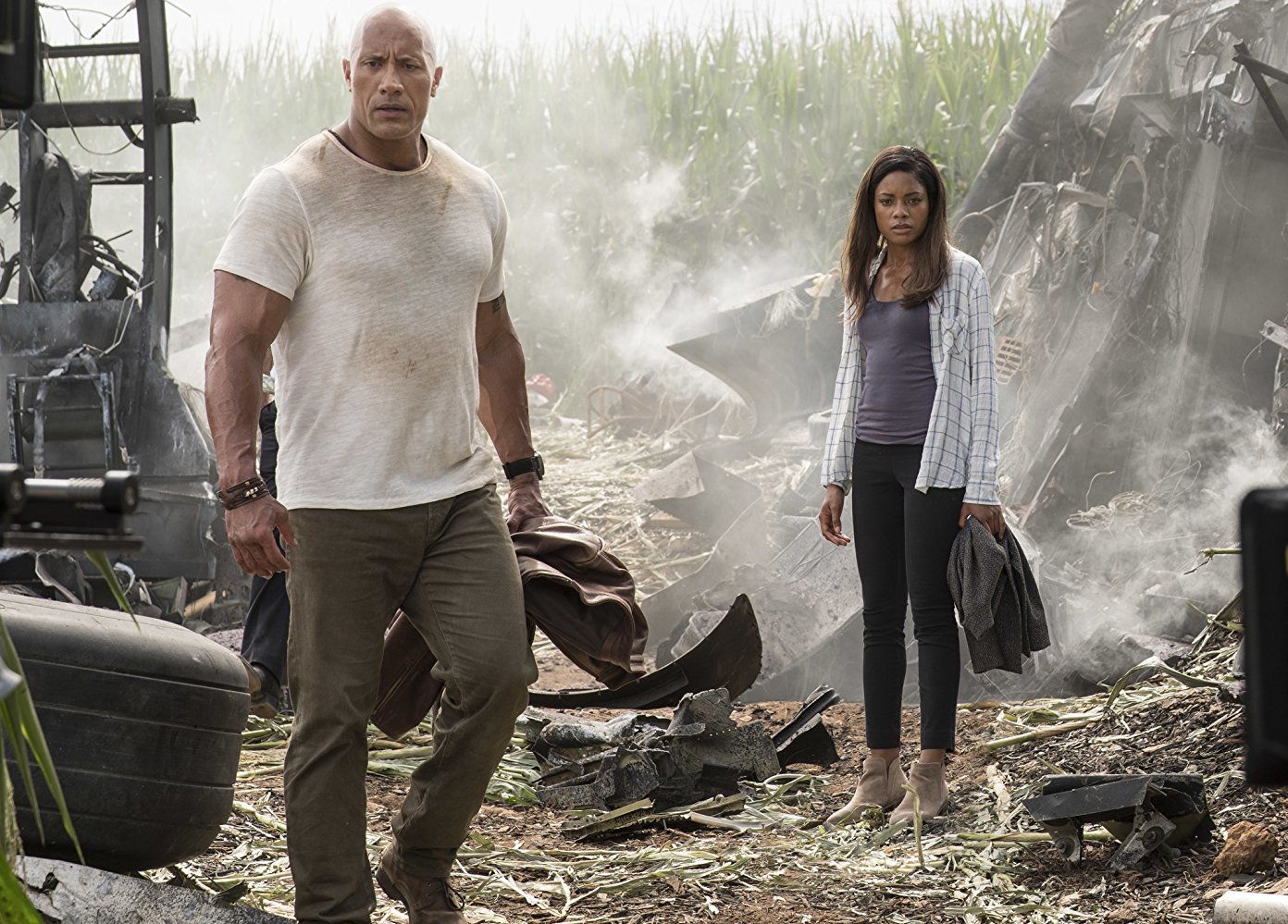 “Rampage” features the kind of one-note roles that this pedigreed cast would never normally consider were it not for the paychecks involved. Very much a Dwayne Johnson vehicle, for much of the proceedings, the wrestler turned actor skates by on his charming tough guy persona, hitting the requisite comic and action notes as necessary. As the genetic engineer who teams up with Okoye to stop the destruction brought forth by the pathogen that she helped design, Naomie Harris easily handles the role’s dramatic and expository requirements, while Jeffrey Dean Morgan seems irrationally pleased playing his underwritten agent character. And while Malin Åkerman is appealingly villainous as the CEO of Wyden Technologies, it’s Jake Lacy as her whiny brother Brett who steals the movie.

All in all, “Rampage” is a forgettable and regrettable video game adaptation.