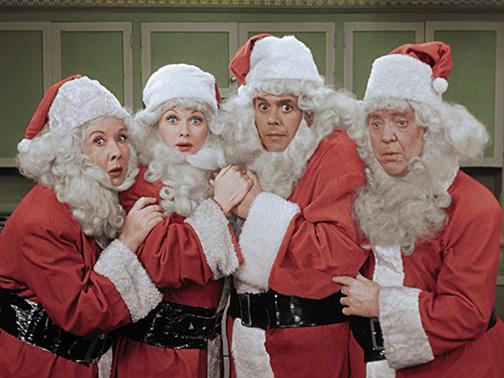 I LOVE LUCY CHRISTMAS SPECIAL features “The Christmas Episode” and the newly colorized “Pioneer Women.” Both were colorized with a nod to the 1950s period in which they were filmed. The main titles and end credits are seamlessly combined into one set at the beginning and end of the hour, with no interruption between the episodes.

“The Christmas Episode” finds the Ricardos and Mertzes decorating Lucy and Ricky’s Christmas tree and reminiscing about how their lives have changed since the arrival of the Ricardos’ son, Little Ricky (Keith Thibodeaux). Flashbacks recall the night Lucy tells Ricky she is pregnant, the time Lucy shows up unexpectedly as part of a barbershop quartet, and the day Ricky and the Mertzes rehearse taking Lucy to the maternity ward.

“The Christmas Episode” was first broadcast on CBS on Christmas Eve, 1956. The episode was not included in the series’ long history of rebroadcasts, first on CBS Daytime and later in syndication. Long thought to be lost, the program was rediscovered by CBS in 1989.

In “Pioneer Women,” Lucy and Ethel’s hopes of joining the posh Society Matrons’ League leads to a bet with their husbands over which sex – the men or the women – had it harder living in a bygone era. They select the turn of the last century, and as Lucy and Ethel start to bake their own bread and churn their own butter, the men become acquainted with straight-blade shaving and riding home from work on horseback. They all have some “‘splainin’” to do when two ladies from the Society Matrons’ League stop by for an unexpected visit.

“Pioneer Women” was originally broadcast on March 31, 1952, and became an immediate viewer favorite.

“I Love Lucy” Christmas specials have aired on the Network the past five years, each combining the holiday-themed episode with a different comedy classic. Beginning in 2015, “The Christmas Episode” has been shown colorized in its entirety, with fully-colorized flashback scenes that had previously been presented in black-and-white.

“I Love Lucy” was broadcast on the Network from Oct. 15, 1951 through June 23, 1957. It was voted “The Best TV Show of All Time” in a 2012 viewer poll conducted by People magazine and ABC News. “I Love Lucy” stars Lucille Ball and Desi Arnaz as Lucy and Ricky Ricardo and Vivian Vance and William Frawley as the Ricardos’ friends and landlords, Ethel and Fred Mertz.