What Are The 10 Worst Halloween Candies? 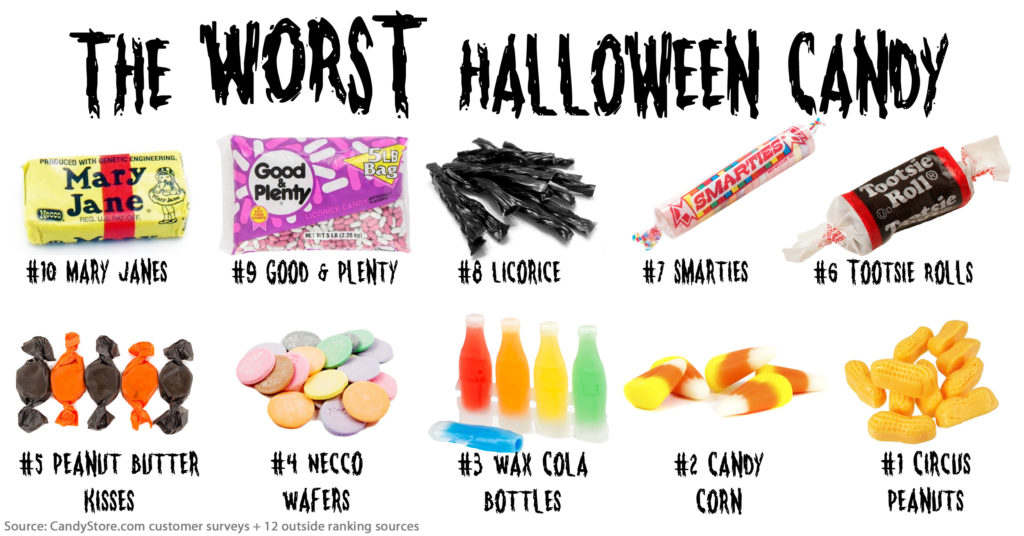 Candy Corn... who actually likes it? Sure, every year you look at it and think, "That looks pretty good, let me give it a try." And then... you immediately regret it. In fact, Comic Lewis Black has an entire stand-up routine about it.

According to Clair Robins at the Candy Store... these are the WORST Halloween candies. Emphasis is important because people, frankly, get pretty heated about this. With Halloween just around the corner, the strong opinions come out full force. It's been written about and voted on, but never to this level. Here are THE worst Halloween candies. ...and the best ones too.

Clair took 12 lists of best and worst candies published on reputable websites, adding in their own CandyStore.com customer survey data (over 40,000 surveyed!) and mash them all together into the ultimate list.

Here’s how they did it. First, they looked at the following lists of best and worst Halloween candies.

Next, we surveyed over 40,000 of our own customers. Then, we put the best and worst candies into a spreadsheet. In Column A we had a number value. We weighted each list, so a candy that got listed as the worst gets 10 points, while one that ranks 10th worst gets one point. Same idea goes for the best list. We then tallied up the points and created our list.

Peanut butter is great. Chewy candies can be great. But there’s just something unappealing about this chewy mess. Bit-O-Honey was ranked #11, confirming that some flavors just don’t mix well with chewy candies.

Since Good & Plenty are pretty much licorice, we see the reason why people don’t like them. I never minded getting a box here and a box there on a Halloween excursion. But they were never my favorites — which meant I ate them first, which is kid logic for ya.

Note that this does not include Twizzlers, and if you read the lists you’ll see they allude to, if not outright say, black licorice. Around the office the reaction was pretty much the same. Australian licorice, if you can get your hands on it, is great. The style we see at Halloween? Not so much.

Your kids will get plenty of these on Halloween. It’s inevitable. At first they’re not so bad. But the human tongue can take only so many vaguely sweet, chalky hard candy.

Your kids will also get a lot of these. They’re the easy way out for people who don’t want to spend money handing out candy to kids. You can throw a handful into each kid’s bag and it won’t set you back much. But kids tend not to like them. Note that this is a combination of regular Tootsie Rolls and flavored Tootsie Rolls (which are flat out disgusting). We combined a few items on the lists to make them a bit easier.

These are neither Reese’s Peanut Butter Cups, nor Hershey’s Kisses. I’ve seen them referred to as Mary Janes, which makes enough sense. You know these because they have a plain orange or black wrapper. My advice is to leave them in that wrapper and move onto the next candy.

They’re like Smarties, but bigger, not as sweet, and more chalky. So yeah. These took the top spot on one list, and I’m surprised they weren’t on every list. When I started this project, I was sure that they’d be the hands down worst candy.

The novelty of these is great. The first time you get one. When you’re five years old. Then the realization sets in: you’re biting through wax to get not even a mouthful of sugar water. By age eight you toss them in the trash without even bothering.

Look, if you don’t like candy corn, you can just give it to me. Yes, it’s just sugar. Isn’t that the point? Candy corn is nothing special. There are absolutely better candies out there. But if you can’t enjoy stuffing handfuls of candy corn into your pie hole, well, I don’t even know what to tell you.

I’d completely forgotten about these! Or, more accurately, I’d blocked them out. There is no way to describe the vileness that is Circus Peanuts. I have to believe that they weren’t rated as the worst on everyone’s list because they, too, blocked these inedible monstrosities from their memories.