An expedition crew exploring an uncharted island in the South Pacific get more than they bargained for when they encounter a mammoth ape and other surreal species in Kong: Skull Island, a rollicking reboot of the classic franchise featuring an embarrassingly rich ensemble cast led by Tom Hiddleston, Brie Larson, John Goodman and Samuel L. Jackson.

Only the second film by The Kings of Summer director Jordan Vogt-Roberts, this seriously entertaining, ambitious-as-hell adventure flick not only qualifies as a worthy addition to the lauded franchise, but also as a top-notch piece of commercial filmmaking. With an absurdly talented ensemble cast chewing up the exotic scenery, magnificent cinematography that calls to mind Vietnam War films like Apocalypse Now, bold action sequences with uncannily lifelike CGI, and a soundtrack stacked with classic rock, this roaringly good franchise flick exceeded my wildest expectations. 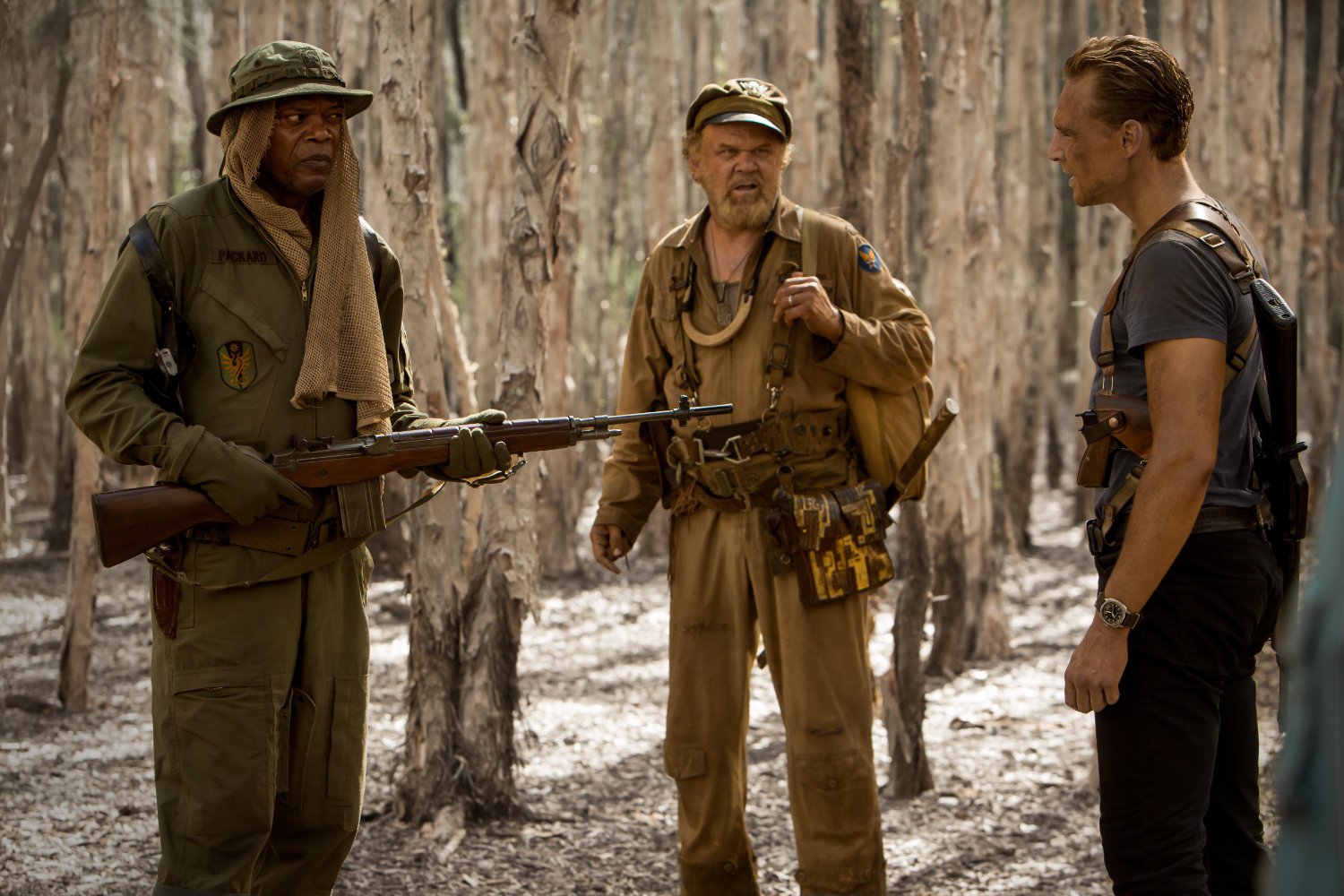 Given the dangerous conditions surrounding the island, the expedition team is forced to take an aerial survey of the land; but when they set off a series of seismic charges as part of their research, they inadvertently disturb the island’s de facto guardian, a hundred-foot tall ape named Kong. After Kong brings the mission to a helicopter crashing halt, the remaining team members, understandably shaken from their surreal encounter, head north to the extraction site hoping to make it off the island in one piece. As the expedition team treks north, encountering a host of MUTOs and indigenous Iwi tribesmen along the way, they begin to understand, with the help of a former WWII fighter pilot and 28-year Skull Island resident (Reilly), that Kong isn’t the monster they first encountered, but something of a peacekeeper who oversees the island’s fragile ecosystem.

The transition from helming a modest indie to a mega-budget studio film can’t be an easy one, but aside from a few moments that come across as excessive and ill-considered, with Skull Island Vogt-Roberts makes a monumental entrance into studio filmmaking. Though largely concerned with the kind of audacious action sequences audiences expect from a big-budget spectacle, the screenplay – credited to Dan Gilroy, Max Borenstein and Derek Connolly, with Jason Gatins retaining story credit – still has more on its mind than your average blockbuster, using its 70’s setting and man-versus-nature storyline to incorporate some timely commentary that draws parallels to the politically fraught climates of then and now. However, the eye-popping action and immersive CGI alone make this monster movie worth your while, achieving nonstop tension as it jumps from one elaborate set piece to the next. 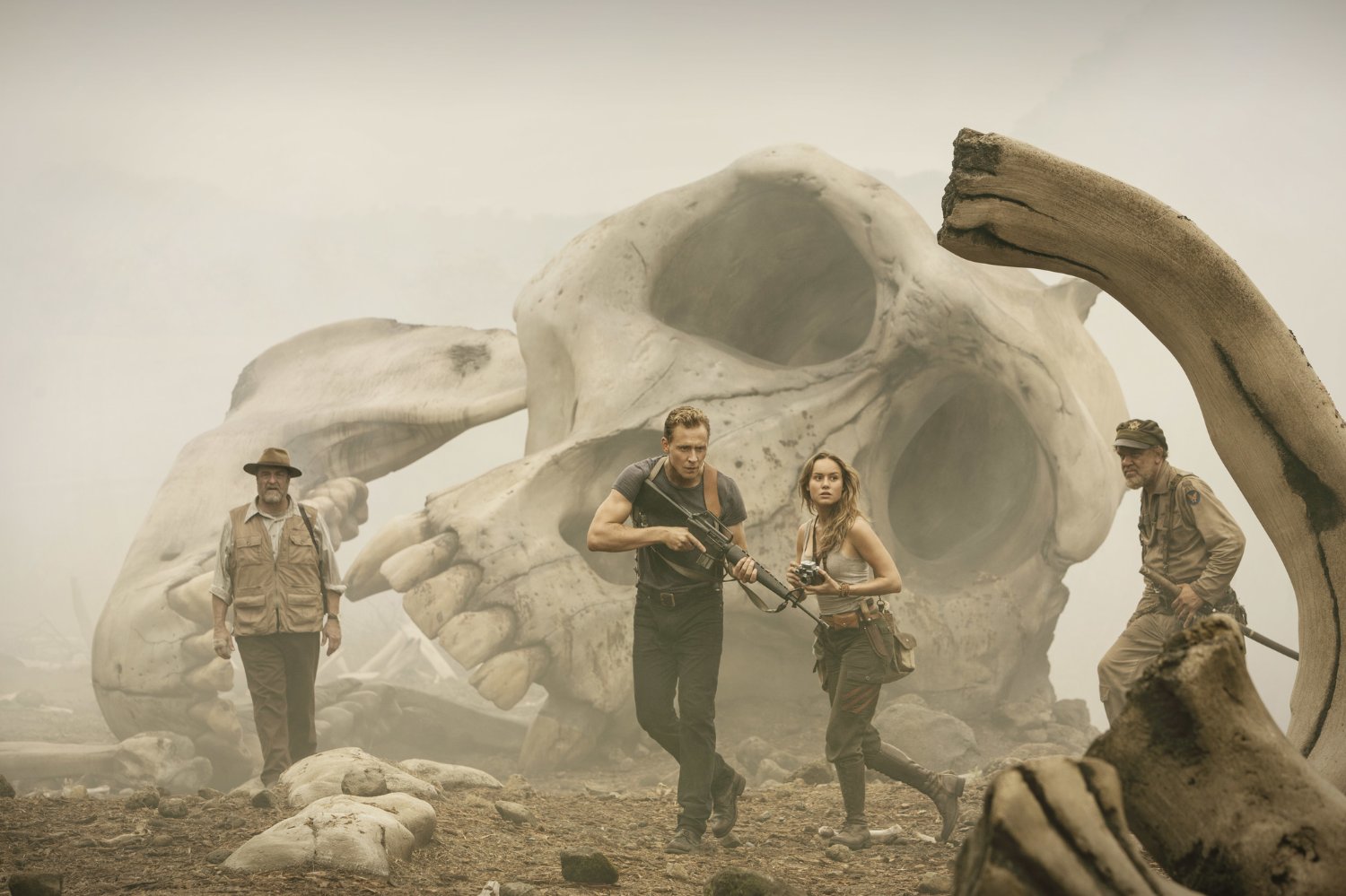 The ensemble cast of Skull Island proves that they’re more than up for the adventure, though given the emphasis on action, audiences shouldn’t expect much by way of character development. Tom Hiddleston and Brie Larson make a good match as the team’s tracker and photographer who first encounter Kong’s softer side, and screen vets John Goodman and Samuel L. Jackson inject an appropriate amount of caginess and vengefulness to their respective characters, but it’s John C. Reilly as the loopy Skull Island inhabitant who proves the best company among the team. And while Peter Jackson created a sufficiently realistic world of fantastic beasts in his 2005 remake of the 1933 original, Vogt-Robert’s creatures are more lifelike than ever before, effectively immersing audiences in the otherworldly proceedings.

Kong: Skull Island is a worthwhile expedition that proves the monster movie is alive and well.

Rated PG-13 for intense sequences of sci-fi violence and action, and for brief strong language.