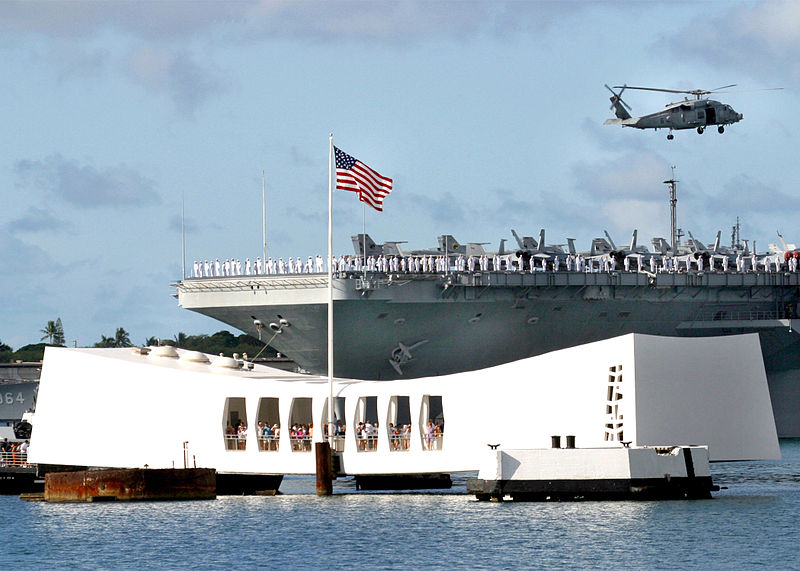 On December 7th, 1941 Japanese fighter planes launched a surprise attack on the American naval base at Pearl Harbor on Oahu, Hawaii. According to history, more than 2,000 Americans soldiers and sailors died, and another 1,000 were wounded. The day after the assault, President Franklin D. Roosevelt asked Congress to declare war on Japan.

It was the Pearl Harbor event which led the United States to join World War II.

Memorials take place around the nation every year.

For more than two decades San Pedro Harbor was the homeport for many of the ships attacked on December 7, including the battleships California, Pennsylvania and Arizona.  Battleship IOWA’s sister ship the Missouri currently resides as a memorial in Pearl Harbor.

IOWA Remembers is an  annual series of events and ceremonies presented by the Pacific Battleship Center (PBC) aboard Battleship IOWA.

On TV, the Smithsonian Channel premiered a new series, THE LOST TAPES, which dives deeper into the gripping events, recapturing moments as they happened, raw and unfiltered.

In Concert, Garth Brooks is set to perform unplugged alongside special guest Trisha Yearwood, in support of the 75th Commemoration of the Attack on Pearl Harbor in Hawaii. The two performances will be much like his shows at Wynn in Las Vegas, just him and his acoustic guitar. The two performances will be December 10th at the Neal S. Blaisdell Arena. The first show is at 6:30 PM and the second show is at 10:00 PM.

Tickets can only be purchased at ticketmaster.com/garthbrooks or ticketmaster.com or either Ticketmaster Express 1-800-745-3000 or 1-866-448-7849. Please note there will be no ticket sales at the venue box office or Ticketmaster outlets on October 22nd.All tickets will cost $69.00 plus a $6.25 service charge.

The innovative room-scale experience is also a part of a special exhibition at the Newseum in Washington, DC, through December 11.