The Bunny Ranch Launches Their “Hookers For Hillary” Campaign 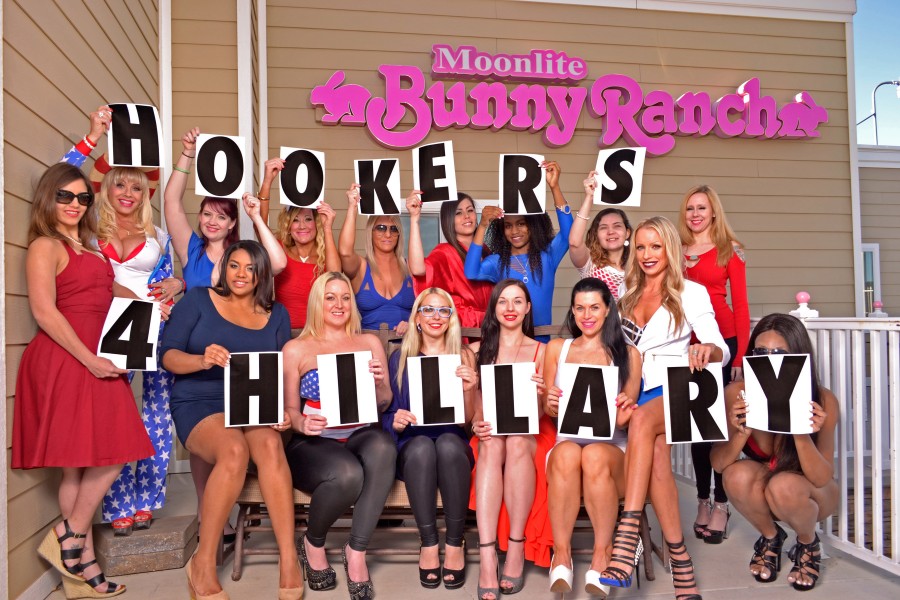 Hillary Clinton, as part of her husband’s administration, envisioned health care reform in the 1990’s, long before President Obama was able to sign it into law.  The Affordable Health Care Act made health insurance available for the first time ever to the 500 independent contractors employed by Dennis Hof.  With any Republican nominee likely to work for its’ repeal, the Bunnies want to protect the quality health coverage that they now enjoy.

As Secretary Of State, Hillary Clinton gained invaluable experience negotiating with foreign leaders, and the Bunnies can definitely relate to negotiating through a language barrier.  The Bunny Ranch entertains customers from all around the globe, and the girls have great respect for any woman who can take powerful men from oppressive cultures and make them bend to her will.  With her eye on the international landscape, the Bunnies are confident that President Hillary Clinton would also avoid a repeat of the Secret Service’s Colombian prostitution scandal by making sure that her detail “buys American.”

*Support for Agencies To Protect The Public’s Health

Nevada’s mandatory testing of legal prostitutes for sexually transmitted diseases is a successful example of effective government regulation.  While Republican candidates have questioned the need for agencies like Health and Human Services (HHS) & the Food And Drug Administration (FDA), the Bunnies applaud Hillary’s recognition of the fact that responsible government oversight is a key to protecting the public’s health from widespread disease.

*Prevention Of A Return To Supply-Side Economics

Bill Clinton presided over the most prosperous time in Bunny Ranch history, which coincided with a tax increase on the wealthiest Americans such as brothel owner Dennis Hof. The Bunnies recognize that thriving economies are built from the bottom up, where the vast majority of their clients originate. A return to relying on the disproven theory of trickle-down economics would only serve to exclude the vast majority of hard-working Bunny Ranch clients from having the discretionary income to enjoy with their favorite Bunny.