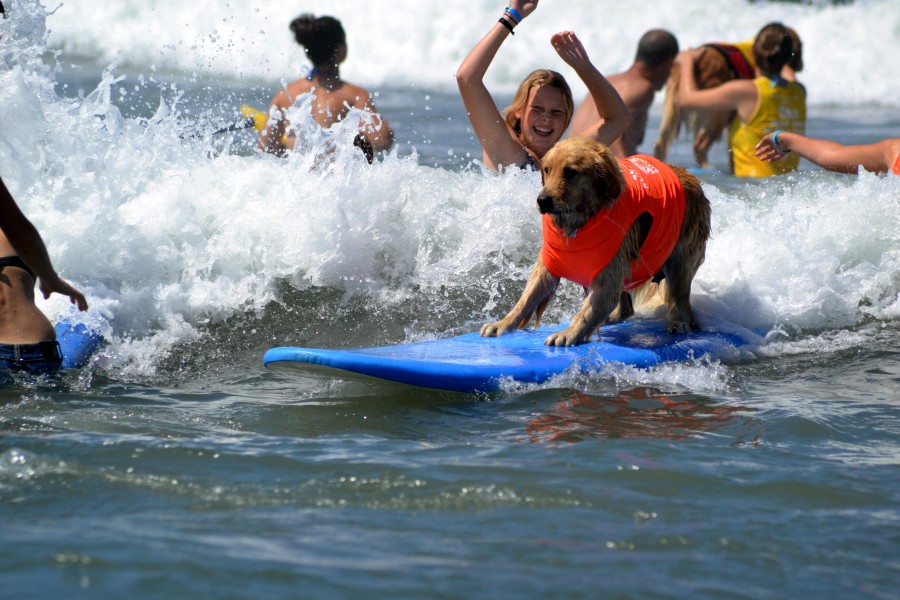 When a handful of locals and their beach-loving pups waded into the waves for Helen Woodward Animal Center’s first Surf Dog Surf-A-Thon in 2005, no one would have guessed that the canines catching those perfect waves were also launching the beginning of an annual bone-afied athletic competition that would catch on across the world.

A decade later, the phenomenal success of the once-humble dog surfing competition has turned ‘dogs on surfboards’ into a platform to raise life-saving funds and awareness for orphan pets at similar events world-wide. To mark this incredible milestone Helen Woodward Animal Center is thrilled to announce that, for the first time ever, it will induct multiple canine surf legends into the Surf Dog Hall of Fame. The 10th annual Surf Dog Surf-A-Thon is presented by Blue Buffalo and takes place at Dog Beach Del Mar on Sunday, September 13th, 2015 from 8am to 2pm PST.

Helen Woodward Animal Center’s canine surf contest is the largest of its kind in the country and will feature more than 80 dogs surfing in four different weight class competitions.   Winners are selected based upon their ability to ride the waves, have fun and stay on their boards.  Keeping their eyes on the prize, “Top Surf Dog 2015”-hopefuls have attended recent Center Surf Dog classes with tail-wagging enthusiasm in hopes of grabbing the coveted title on the big day.  Each surFUR heat will be judged by celebrities, surf pros and aficionados.

The event has a lot to celebrate in its 10th year as supporters, sponsors and families of individual canine athletes have called “all paws on deck” in an incredible push for participation and fundraising, which to-date has already raised thousands.  Included in the list of supporters are two Hollywood powerhouses that are devoting their time to the September event.

Emmy-nominated Executive Producer Michael Levitt, an avid animal welfare proponent and creator of the groundbreaking nationally televised dog rescue spectacular, FOX’s Cause For Paws, will serve as a costume judge at the event.  Levitt’s many producing credits include The Daytime Emmys, Skin Wars, Ask Oprah’s All- Stars, The Billboard Music Awards, E! Live From the Red Carpet: the Oscars, the Grammys, the Golden Globes and many more.  When Levitt isn’t creating hit shows, he’s driving all over greater L.A. rescuing dogs from kill shelters and placing them in loving homes.

Teen actor Lou Wegner, is also showing his support for the annual Surf Dog fundraiser by serving as a costume judge.  The young animal-focused philanthropist has appeared in such movies as Trouble With the Curve (starring Clint Eastwood, Amy Adams, and Justin Timberlake), The Pledge, A Christmas Tree Miracle and many more.  He hosted Young Hollywood For Humanity at the Hero Dog Awards in Beverly Hills and was a celebrity judge, founded Kids Against Animal Cruelty (an educational foundation for animal rights, rescue and shelter adoption) and was named the 2013 Junior Pet Hero of The Year by Pet Philanthropy Circle. The 19 yr-old is also the National Youth Ambassador for the American Humane Association and was named one of the top five celebrity activists by Care 2 Make A Difference foundation.

Helen Woodward Animal Center is honored to have both Levitt and Wegner as celebrity guests.