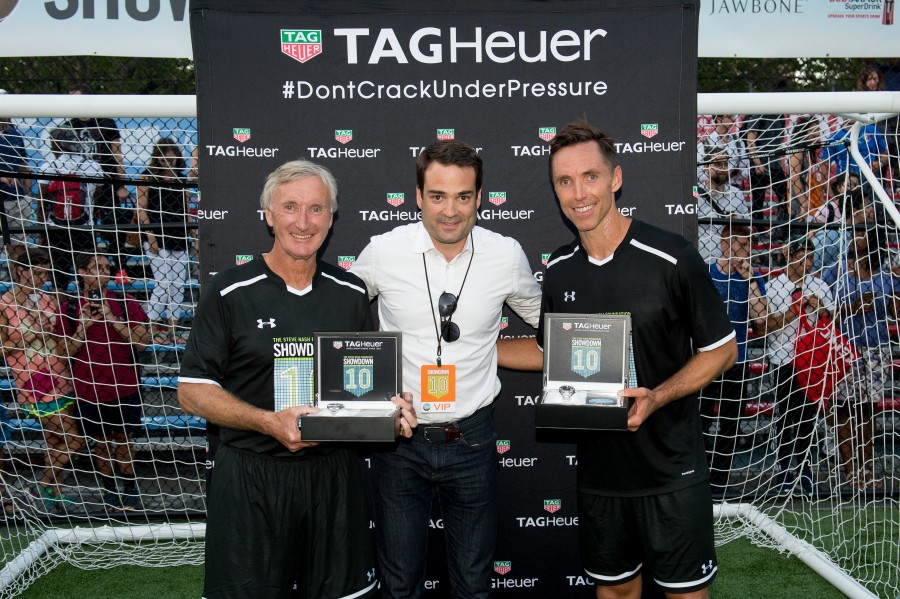 Some of the world’s greatest NBA legends and soccer all-stars showed that they #DontCrackUnderPressure while playing a sweet game of pick-up futbol at Sara D. Roosevelt Park in New York City, benefiting children everywhere.

Sharing TAG Heuer’s DNA for overcoming obstacles and a quest for ultimate precision, eight-time NBA All-Star and a two-time recipient of the NBA Most Valuable Player Award, Steve Nash brought his passion to play in this innovative soccer match that any sports fan would appreciate.

Featuring NBA stars and soccer pros from around the world such as Alessandro Del Piero, Luol Deng, Matthew Dellavedova, Chris Mullin and Giuseppe Rossi amongst many more, the Steve Nash Showdown is a uniquely organic charity soccer match led by Nash himself that raises funds for critical needs services for kids.

Showdown NYC ’15 benefits the Steve Nash Foundation’s work to improve conditions for children impacted by abuse and neglect. Premised on the idea that children matter, the newest SNF platform aims to foster research and progress in the science of child abuse prevention with an aim to ending child abuse all together.

TAG Heuer’s iconic sport watch, the Aquaracer will be awarded to those players that embody the brands #DontCrackUnderPressure mindset including: The Spirit of Showdown Award and Player of the Match Award.  Steve Nash, a friend-of-the-band will also receive an Aquaracer which is the perfect timepiece for a sports icon who lives a very active lifestyle.

Jean-Claude Biver, CEO of TAG Heuer and President of LVMH Watches believes the Steve Nash Foundation and Showdown truly epitomizes the TAG Heuer brand stating, “Steve Nash is a true sports legend and his spirit and determination that brought him that title, truly exude TAG Heuer’s DNA and #DontCrackUnderPressure mentality.”