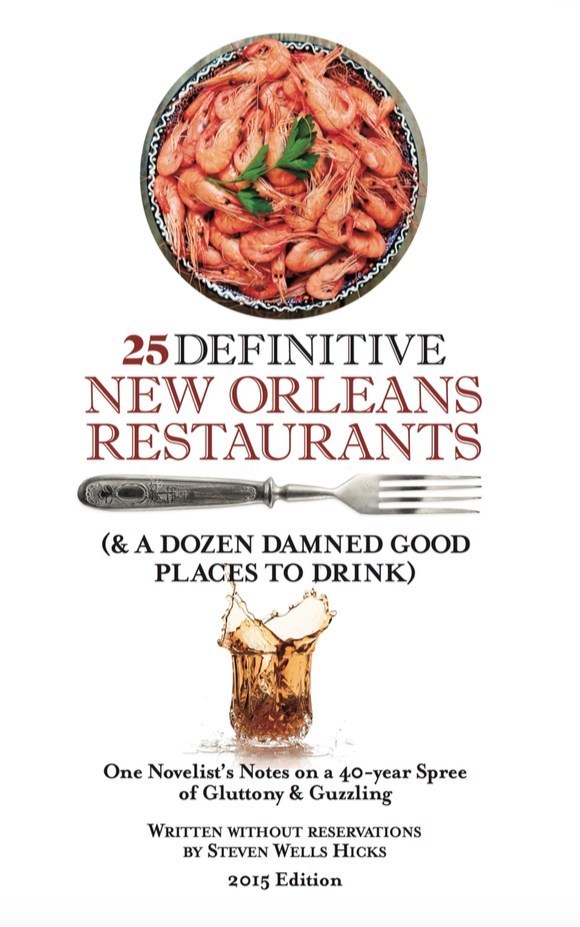 After forty years of searching for what makes the restaurants and saloons of New Orleans unique, novelist Steven Wells Hickshas come up with some answers – thirty-seven of them to be precise.

In his sixth guidebook on the subject, 25 Definitive New Orleans Restaurants (& A Dozen Damned Good Places to Drink), Hicks has distilled several hundred reviews into a manageable cluster of establishments that he believes will point city visitors toward “the real deal.”

“Visitors to New Orleans are looking for dining and drinking experiences that reflect the cooking, cocktail and cultural quintessence of America’s quirkiest city.” Excluded are chain restaurants or establishments that could be found “in Anywhere U.S.A.“

While a few classics like Galatoire’s and K-Paul’s are included, Hicks focuses most of his attention on independent, family-owned operations. Among them you will discover a remote Italian roadhouse with a shady history, a “greasy spoon” specializing in attitude, and a blue-collar lunchroom that pours steaming boiled crawfish out of a brown paper bag onto yesterday’s newspaper.

That same variety is featured in the saloon section of the guidebook. Among the dozen bars examined are craft cocktail specialists, beer joints, and an Irish pub where Hicks goes searching for the urn containing the ashes of its first proprietor.

The reviews are more thorough than those found in most conventional guidebooks. According to Hicks, the reason for that is, “The common thread of more memorable places is the more memorable stories found within them. Those stories aren’t limited to food and drink. Sometimes the real star of a place is its history, sometimes it’s a recipe they invented, and sometimes it’s the pure vibe of the joint. I try to stay out of the story’s way and let it tell itself. Most of the time it takes more than a single paragraph fawning over a joint’s virtues.”

Hicks doesn’t pull punches, and he isn’t afraid to pour on the literary hot sauce when a restaurant doesn’t live up to its reputation. “I don’t write to please the chamber of commerce,” he says. “I owe my loyalty to the adventurous food lovers who buy my books.”

What emerges is “a valentine, sometimes left-handed but hopefully right-minded, to a city and the people of an industry that have simultaneously provided me with a lifetime of sensuous fulfillment while wreaking untold havoc with my waistline and the balance on my American Express card.”

It’s plain to see that the self-styled “curmudgeon” takes his work personally.

25 Definitive New Orleans Restaurants is available for sale on Amazon in eBook and paperback.