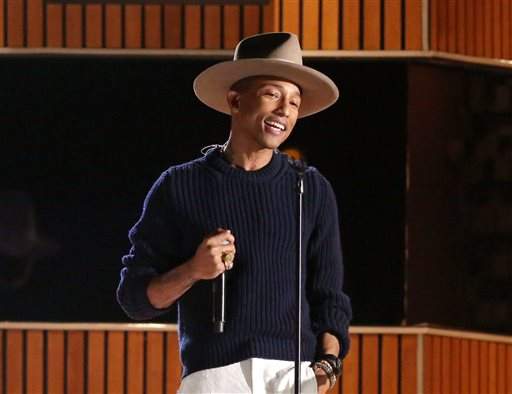 Following a massive surge of media attention, Pharrell Williams‘ highly anticipated and critically acclaimed new album G  I  R  L has made an impressive debut around the world. Highlighted by the chart-topping, Oscar-nominated single “Happy” (from Despicable Me 2), G  I  R  L debuts at #1 in the U.K., France, Switzerland, and Belgium. The album also debuts at #2 on the Billboard 200 this week. G  I  R  L is available here: http://smarturl.it/GIRLalbum.

G  I  R  L—which features duets with Justin Timberlake and Alicia Keys as well as guest appearances by Daft Punk, Miley Cyrus, and JoJo—also enters the charts in the Top 3 throughout several international territories, including Canada, Australia, Germany, The Netherlands, New Zealand, Denmark, Ireland, and Sweden. Since its release, G  I  R  L has soared to #1 on iTunes in the U.S. and in more than 65 countries.

Details of the forthcoming The Amazing Spider-Man 2 Original Motion Picture Soundtrack were revealed. Pharrell has co-written and produced the soundtrack’s lead track, “It’s On Again” by Alicia Keys featuring Kendrick Lamar. The film’s score was composed by Oscar- and Grammy-winning composer Hans Zimmer and The Magnificent Six, featuring Pharrell Williams and Johnny Marr. The soundtrack arrives in the U.S. April 22 via Columbia Records.

Pharrell recently announced a partnership with the United Nations Foundation to celebrate the annual global International Day of Happiness, Thursday, March 20. Drawing inspiration from the “Happy” videos fans worldwide have already posted, Pharrell encourages all his fans to post YouTube videos of themselves demonstrating their happiness to his hit “Happy” with the hashtag #HAPPYDAY and then register their submission at http://24hoursofhappiness.com. At noon on March 20 in each time zone, Pharrell will spotlight the best submissions on the site. Fans are also encouraged to use #HAPPYDAY throughout all social networks.

As part of this global digital engagement, people will be reminded that everyone deserves a chance at a happy, healthy life, and encouraged to make donations to support UN humanitarian efforts designed to increase those opportunities for the people who need it most. Donate here.