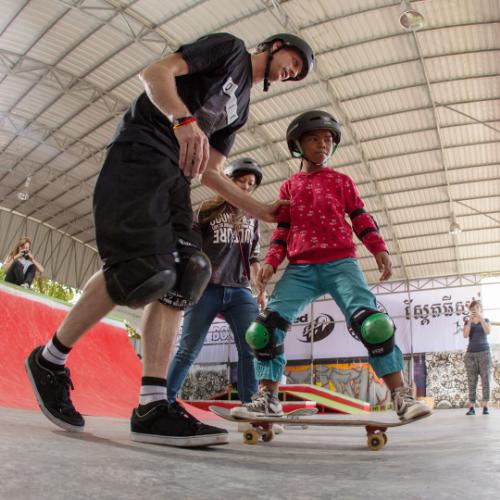 The Tony Hawk Foundation Board Of Directors has announced the nonprofit organization’s latest skatepark grant awards, plus a new initiative to expand its International work through a $100,000 commitment to Skateistan, the youth empowerment and educational program in Afghanistan, Cambodia, and South Africa.

THF’s partnership with Skateistan (www.skateistan.org) will allow both organizations to more directly impact the lives of some of the world’s most vulnerable youth, who benefit daily from the education, exercise, and counseling services they experience at Skateistan’s facilities in Kabul and Mazar-e-Sharif, Afghanistan; Phnom Penh, Cambodia; and soon in Johannesburg, South Africa.

“It’s a huge honor for Skateistan to have the official support of the Tony Hawk Foundation, which is a pioneer in putting skateboarding on the youth-development agenda,” said Skateistan Founder and Executive Director Oliver Percovich. “This grant will allow hundreds of children weekly to access skateboarding-based educational programs.”

During a recent visit to Skateistan in Phnom Penh, Tony Hawk skated with the students and experienced the program first-hand: “Meeting those youth and seeing how the curriculum engaged and inspired them confirmed what I already knew—that skateboarding is a universal force for good in the lives of youth. It’s a privilege to be able to support Skateistan.”

U.S. skatepark development remains a cornerstone of THF’s mission. Domestically, the THF Board awarded $60,000 in grants to help fund the construction of free, public skateparks in eight communities, including a high-profile 12,000-square-foot skate plaza on a former industrial site in Chicago’s South Lawndale neighborhood.

“We’re proud to support a modern landmark skate plaza in Chicago,” said Tony Hawk. “The youth of the South Lawndale neighborhood will benefit from having their own world-class skate facility, and from the camaraderie and community they build there.”