New On NBC: “About a Boy” Premieres Tonight 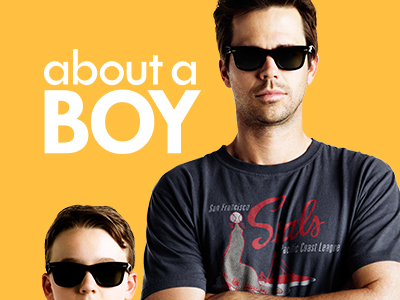 Based on the best-selling Nick Hornby (“High Fidelity,” “An Education”) novel comes the series “About a Boy,” a different kind of coming-of-age story produced and created for television by Jason Katims (“Friday Night Lights,” “Parenthood”). The pilot is based on the screenplay by Peter Hedges and Chris Weitz & Paul Weitz, with the teleplay written by Katims and directed by Jon Favreau (“Elf,” “Swingers”).

With so many shows on network TV, “About a Boy” stands out as a heartwarming, smart and funny series. Premieres Saturday, February 22 (11-11:30 p.m. ET), following Olympic Coverage.

Will Freeman (David Walton, “Bent,” “Perfect Couples”) lives a charmed existence. After writing a hit song, he was granted a life of free time, free love and freedom from financial woes. He’s single, unemployed and loving it. So imagine his surprise when Fiona (Minnie Driver, “Good Will Hunting,” “Grosse Pointe Blank”), a needy single mom and her oddly charming 11-year-old son, Marcus (Benjamin Stockham, “1600 Penn”), move in next door and disrupt his perfect world. When Marcus begins dropping by his home unannounced, Will’s not so sure about being a kid’s new best friend, until, of course, Will discovers that women find single dads irresistible. That changes everything and a deal is struck: Marcus will pretend to be Will’s son and, in return, Marcus is allowed to chill at Will’s house, play ping-pong and gorge on steaks, something his very vegan mom would never allow. Before he realizes it, Will starts to enjoy the visits and even finds himself looking out for the kid.  In fact, this newfound friendship may very well teach him a thing or two that he never imagined possible — about himself and caring for others.