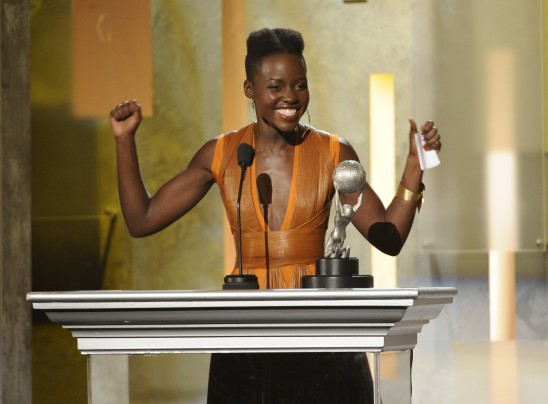 Photo Courtesy of AP
With one week away from the Academy Awards, all of the previous award shows have given audiences a hint at the favorite films of the year. So far, “12 Years A Slave” has swept for the Best Motion Picture category at many of the major award ceremonies. At the 45th NAACP Image Awards, “12 Years a Slave” was the top film recognized for Motion Picture, Directing and Supporting Actress Performance. Here are the 2014 NAACP winners:

Entertainer of the year: Kevin Hart

Actress in a drama series: Kerry Washington for “Scandal”

Supporting actress in a drama series: Taraji P. Henson for “Person of Interest”

Supporting actor in a drama series: Joe Morton for “Scandal”

Actress in a comedy series: Wendy Raquel Robinson for “The Game”

Actor in a comedy series: Kevin Hart for “Real Husbands of Hollywood”

Supporting actress in a comedy series: Brandy Norwood for “The Game”

Directing in a comedy series: Millicent Shelton, “The Hustle”

Writing in a comedy series: Vincent Brown for “A.N.T. Farm”

Actress in a television movie, mini-series or dramatic special: Gabrielle Union for “Being Mary Jane”

Actor in a television movie, mini-series or dramatic special: Idris Elba for “Luther”

Actress in a daytime drama series: Tatyana Ali for “The Young and the Restless”

Actor in a daytime drama series: Kristoff St. John for “The Young and the Restless”

News/information (series or special): “The African Americans: Many Rivers to Cross with Henry Louis Gates Jr.”

Performance by a youth in a youth/children’s program (series or special): China Anne McClain for “A.N.T. Farm”

Song: “All of Me,” John Legend

Instructional: “The Vegucation of Robin: How Real Food Saved My Life,” Robin Quivers