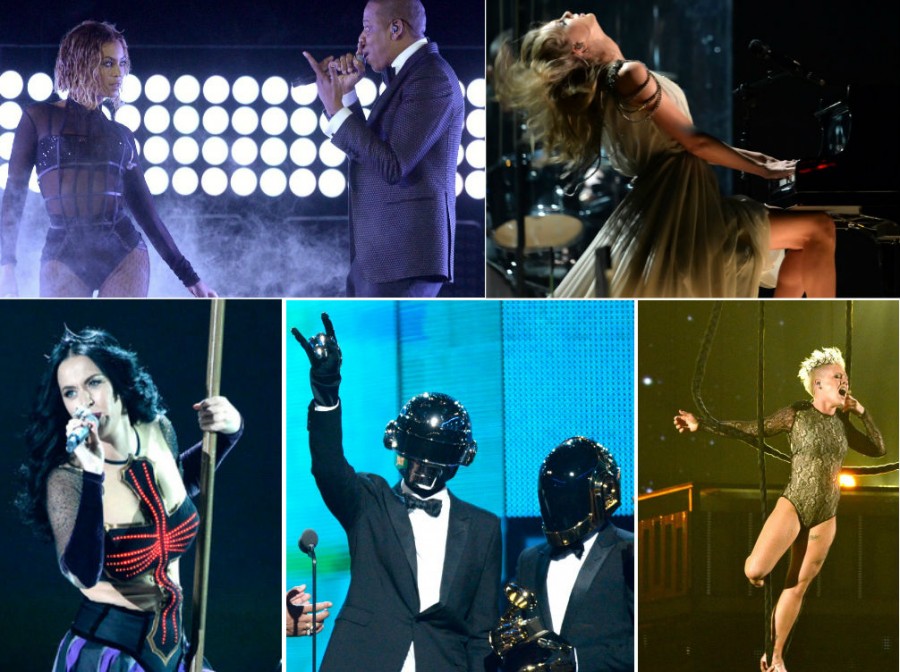 Social media’s favorite power couple, Beyonce and Jay-Z opened The 56th Grammy Awards. Their “Drunk In Love” performance was both revealing and explicit with lacy lingerie and Beyonce’s signature twerking. The husband and wife duo were placed on an even higher pedestal than usual. With a handful of compliments to follow from the Grammy’s host, LL Cool J and presenters Pharrell and Anna Kendrick, it seems the industry has built Beyonce and Jay-Z up to be an untouchable brand. But, “Jayonce” aside, the night turned into a well-paced evening of talented performances and merited awards.

Seventeen year-old Lorde gave a beautiful performance of her “Song of the Year,” “Royals.” Country-pop singer Hunter Hayes delivered his emotional anti-bullying song, “Invisible.” You can never expect anything less than a great stage production and unique wardrobe from Katy Perry, who literally lit the stage on fire with her new witchy “Dark Horse” single. While Chicago sounded great during their medley, Robin Thicke proved to be a bit out of his range, sounding off-key at times. Some of the best moments of the night were the “back to basics” performances from Taylor Swift and John Legend with no special effects; just a piano and a mic. Once again, P!nk absolutely knocked it out of the ballpark with her acrobatic tissue dance in the air, singing “Try” and then joining fun. lead singer, Nate Ruess on stage for “Just Give Me a Reason.” And of course, it is always legendary to watch Sir Paul McCartney and Ringo Starr take the stage together again. The most talked about moment of the 2014 Grammys will be the 33 marriages of gay, straight and mixed ethincities that took place in the aisles during Mary Lambert and Macklemore & Ryan Lewis’ “Same Love” performance. Queen Latifah delivered the vows as Madonna sang an excerpt of “Open Your Heart.”

All performances aside, the night belonged to Daft Punk, Pharrell and Macklemore & Ryan Lewis for taking home the golden gramaphone for some of the most esteemed music awards.

Song of the year
“Royals” — Lorde

Best country duo/group performance
The Civil Wars — “From This Valley”