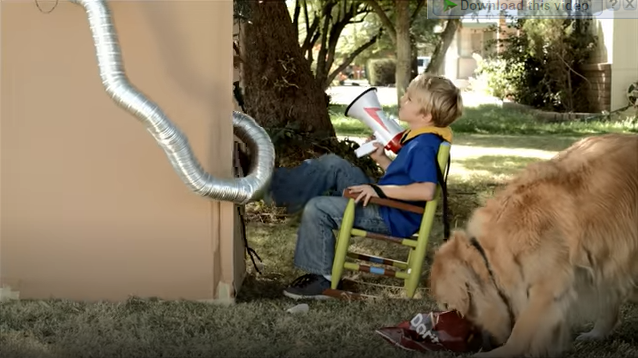 Here’s one of our favorites

Selected from thousands of submissions representing 30 countries around the world, the Doritos brand announced the five finalists for the Doritos “Crash the Super Bowl” contest who are vying for a $1 million (U.S.) grand prize. Fans are now invited to vote for the best ad on www.doritos.com from January 4 through January 29. Ultimately, two ads will air in front of a global television audience during Super Bowl XLVIII — one selected by the world’s votes and one by the Doritos brand team. The two lucky winners will have the opportunity to work with Marvel Studios on the set of “Marvel’s The Avengers: Age of Ultron,” and for the first time in Doritos Crash the Super Bowl history, the creator of the ad that receives the most fan votes will win a guaranteed $1 million in prize money. This marks the first year PepsiCo’s Doritos brand has opened its annual “Crash the Super Bowl” contest to fans from around the world where Doritos tortilla chips are sold. Visit www.doritos.com to view the ads and full contest rules.

The five Crash the Super Bowl finalist ads (in alphabetical order by finalist last name) are:

A qualified panel of judges, including executives from the Doritos brand, advertising professionals and the legendary Stan Lee of Pow! Entertainment — chairman emeritus of Marvel Comics and co-creator of such Super Heroes as Iron Man™, Spider-Man™ and others — selected the five finalist ads.

“As someone who has brought comic book characters to life for an entire career, I know what it takes to tell a great story,” Stan Lee said. “In just 30 seconds, these five finalists tell incredible stories — each with their own style — and have left me truly blown away.”

“When the Doritos brand first launched Crash the Super Bowl, the concept of user-generated content was brand new,” said Ram Krishnan, vice president of marketing, PepsiCo’s Frito-Lay division. “Since then, the amount of content created and shared on a global level has grown to an astounding rate. We were so excited by the global response to this year’s contest, and are thrilled to now spotlight two finalist ads on one of the world’s biggest advertising stages.”

Each of the five Crash the Super Bowl finalists are invited to East Rutherford, N.J., to attend Super Bowl XLVIII and watch the game from a private luxury suite, where they will tune in to learn which two finalist spots will air. The creators of both winning ads will receive the opportunity to work on the set of “Marvel’s The Avengers: Age of Ultron” and the ad with the highest total number of votes will win its creator the $1 million grand prize. The runner-up will receive $50,000 (U.S.). The three finalists whose commercials don’t air during the broadcast will each win $25,000 (U.S.). The Super Bowl XLVIII broadcast is set for Sunday, Feb. 2, 2014, on FOX.