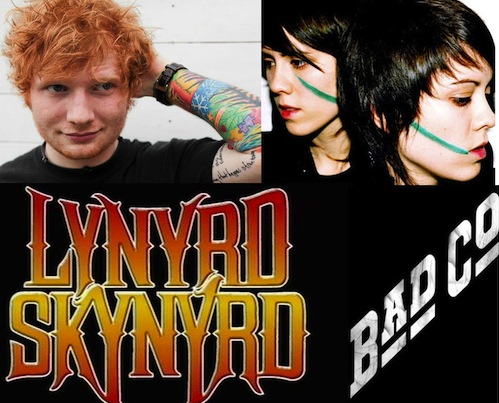 Ed Sheeran has just announced the release date for his upcoming album! Get excited, fans, you only have to wait a little over 11 months to get your hands on it. He has officially revealed February 17th.  If you’re looking for a bit more information on his sophomore effort, Sheeran esoterically offered this, "My second album has taken full shape recently. I don't know if there will be any collaborations on it yet. I have a name for it but I can't tell you the name just yet but it doesn't start with a letter."

Tegan and Sara, hipster favorites and Coachella players, have planned to put out a limited edition EP in support of Record Store Day. The yearly event, which takes place around the country on April 20th, celebrates the still faintly thumping heart of the record business and local music stores. Releasing only 5,000 copies, the EP will feature ten exclusive remixes of their single, “Closer,” by Sultan & Ned Shepard, Morgan Page, Until The Ribbon Breaks, The Knocks, Bradley Hale, Yeasayer, Chris Walla, Damian Taylor, Ted Gowans and C-ro & Sofa. In the spirit of the day the EP will be distributed in vinyl.

Bad Company and Lynyrd Skynyrd are going on tour together. This fusion of English bluesy rock with the good old-fashioned American deep south, brings together some of the best of the 1970’s. "The Skynyrds and I go back to the 70's and the days and nights at the Hyatt House on Sunset in LA aka the Riot House. In the 90's the band introduced me to my wife Cynthia, and that's why I am so damned happy and healthy these years," Bad Company frontman Paul Rogers said of the new tour.  Lynyrd Skynyrd's Johnny Van Zant reiterated the sentiment of mutual admiration saying, "Every member of Skynyrd has been fans of Bad Company from the get go. Personally, Paul is one of my favorite rock singers. We have a deep appreciation for Bad Company's music and look forward to being on the road with them and sharing the stage."

Electronics
Myth Headphones Are Making Their Mark With Customization