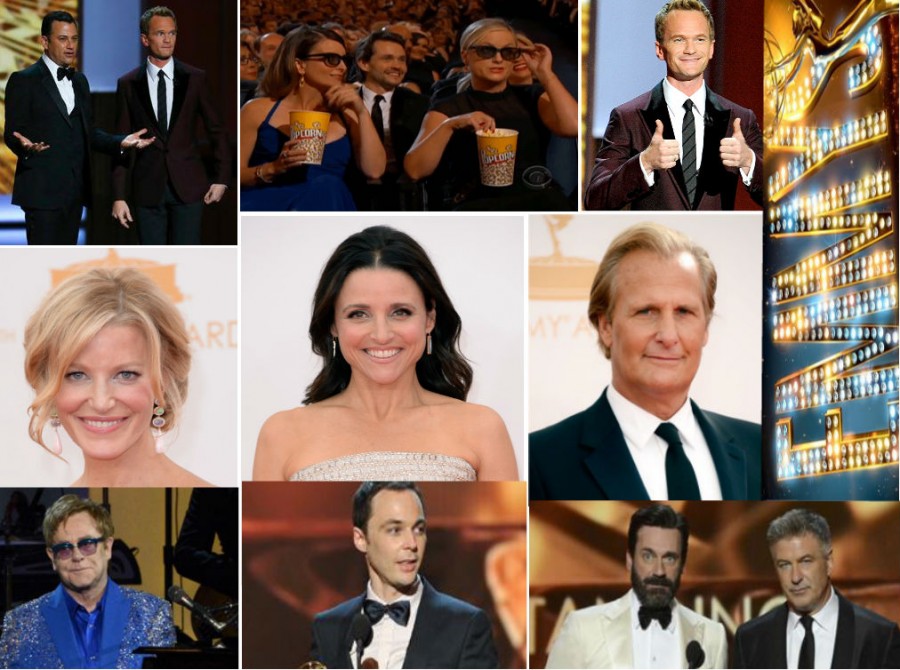 What seemed to be a cheesy start to the 65th Primetime Emmy Awards with host Neil Patrick Harris sitting in front of a plethora of TV screens spewing clips from various nominees… actually turned into an entertaining montage of stage appearances from past Emmy emcees: Jane Lynch, Jimmy Kimmel, Jimmy Fallon, Conan O’Brien, Tina Fey and Amy Poehler. Cut to Kevin Spacey breaking the 4th wall, speaking to the audience in his famous “House of Cards” character. He said with a lifted brow, “It’s all going according to plan…”

As for the winners, there was a nice mix and less of a sweep from one particular show. Veep earned great recognition with two major awards and a clever speech in which Tony Hale assumed his role as Julia Louis-Dreyfus‘ assistant; whispering reminders on who to ‘thank’ throughout her award acceptance. “Boardwalk Empire,” “Homeland,” “Breaking Bad” and “Newsroom” all took home major awards. HBO special, “Behind The Candelabra” was clearly a favorite towards the end of the evening. The revolutionary Netflix series, “House of Cards” saw its first big award with Best Director for David Fincher. There wasn’t a lot of screen time for host Harris, but a funny SNL type sketch about ‘excessive hosting disorder’ with his “How I Met Your Mother” co-stars. Half way through, Harris did not disappoint with his predictable song & dance number with Sarah Silverman and Nathan Fillion. The outstanding choreographer nominees put on a beautiful dance number representing all of the nominated series. As always, at the end of the night – they could have cut a good 30 minutes of the show with unnecessary numbers and presentations. To save us from complete boredom, Will Ferrell presented the final awards with his three kids in shorts and a t-shirt.

And the awards goes to…

Outstanding Miniseries or Movie – Behind The Candelabra

Outstanding Directing Miniseries or Movie – Steven Soderbergh (Behind The Candelabra)