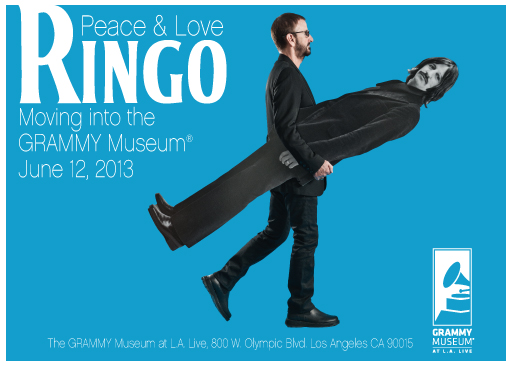 The Grammy Museum has hosted a variety of intriguing exhibits dedicated to superstars such as Whitney Houston and Michael Jackson. Now they have announced the debut of a major new exhibition, Ringo: Peace & Love opening on June 12, 2013 honoring, of course, Ringo Starr of The Beatles. This one-of-a-kind, limited-run exhibit will offer visitors an unprecedented in-depth look at all aspects of Starr’s musical and creative life – as a musician, artist, actor, and as the man the world knows and loves simply as ‘Ringo.’ It also aims to propel Starr’s universal message of peace and love.

Ringo: Peace & Love is both the first major exhibit ever dedicated to a drummer and the first to explore the extraordinary career of the 7-time Grammy Award winner. The scope of exhibit spans Ringo’s early life growing up in Liverpool, from Raving Texans turned Rory Storm, from The Beatles, to becoming a solo artist and then to the All Starrs with whom he is on tour now. This unique collection brings together diverse artifacts, rare and never before seen photographs, documents, personal letters and footage.

Ringo: Peace & Love will be located on the second floor and will include: The drum kit Ringo played at Shea Stadium; The drum kit he played on the Ed Sullivan show; Ringo’s Sgt Pepper Suit; The cape he wore in Help!; The Red Jacket worn during the filming of The Beatles rooftop concert; Personal letters, photographs and documents from the Starkey family and Ringo’s days with the Beatles.

It also features an interactive exhibit, where visitors can take a drum lesson with Ringo.

Bob Santelli, Executive Director of The Grammy Museum said of the exhibit, “We are particularly excited to celebrate Starr’s extraordinary musical legacy with the legions of fans who admire him, as well as to introduce him to a new generation of music lovers.”

Ringo: Peace & Love will be on display in L.A.’s Grammy Museum’s Special Exhibits Gallery through November 2013, after which the exhibit will tour to select cities to be announced soon.